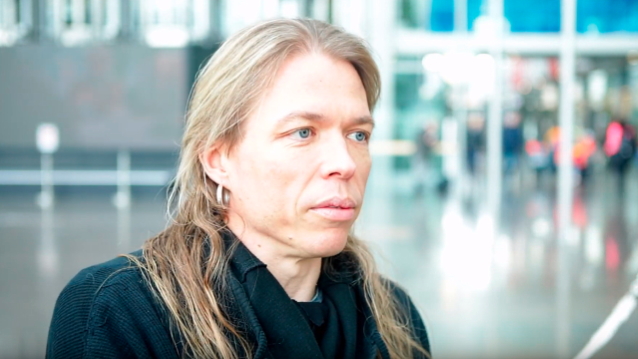 On March 12, Eicca Toppinen of the Finnish cello rockers APOCALYPTICA gave an interview to Laureline Tilkin of Tuonela in which he discussed how the burgeoning coronavirus pandemic around the world has affected his band's personal and economic well-being.

"I think this coronavirus, it's been all the time a matter of time," he said (see video below). "We have had Ebola, we have had SARS, we have had all these kinds of diseases growing up. I'm not a specialist, so I don't know which things are a result of human actions, but most likely we have affected the ecosystem so much that I think it's just a matter of time that nature creates viruses and bacteria that will kill a lot of people.

"We are living in crazy times," he continued. "We've been always living in crazy times. It would be wrong to say that now it's so much more terrible than it was. The past times were even more brutal and more terrible in many ways, but still, with all the knowledge we have now, we should be able to put our act together better and make really actions that we know that are necessary to keep things going in the right path.

"Now we have people like [Donald] Trump, like, today that he just banned Europeans to travel to America. For me, it doesn't really make a logic. Chinese can travel to America, British people can travel to America, but not other Europeans. For me, it feels so crazy to start to make election politics with such huge tools that will affect the people and economy and everything so badly. [Editor's note: The Trump administration announced on Saturday that it will extend its European travel ban to include the U.K. and Ireland as part of continuing efforts to combat the coronavirus pandemic.]

"I'm waiting today what Finnish parliament decides, because now in every other country in Europe except Finland — maybe there are a few other countries as well — but no events [in Finland] are canceled. [Editor's note: On Thursday, the same day that this interview was conducted, Finland banned events for more than 500 people, but stopped short of stricter measures.] So, basically, we are the last resort now who can play shows. And the tour starts today, so I'm going from Helsinki to Turku today, and it might be possible that there's no show tonight. I really hope not, but I guess that also all events in Finland will be banned now. And for us, we have the American tour coming in May. It starts to look more and more possible that that will be canceled. Then we will end up in a situation where all of our work is gone for half a year, all of our income is gone, so we will get into a really hard economical situation as well. But luckily, we can do always the thing what we usually do to work with no money, which means writing music. [Laughs] So we can start to write the next album, if we can't play shows.

"In everything in life, I always try to look at the bright side of bad things. [Laughs]"

Toppinen went on to say that APOCALYPTICA would try to reschedule any canceled dates. "Of course, but that's super complicated — the availability of venues, that's always one thing," he explained. "Plus, we have, for example, for autumn, we have already — there's gonna be three tours, one month each, so there's no way that we can move the shows from the spring to the autumn. It's not possible. So then it would be postponed by one year or something. So it's really fucked up. But what can we do? I trust in the people who are specialists, so I'm not trying to be the specialist and say if the actions are right or wrong. I think the specialists, they advise to do the most clever things. That's what we have to trust. [Laughs]"

The WHO said a vast majority of coronavirus patients recover: those with mild illnesses in two weeks, while those with more severe symptoms may require three to six weeks.

In the U.S., the number of known coronavirus cases has reached at least 2,885, with some modeling studies suggesting the U.S. — if its residents don't take preventive measures — will have more than 8,000 cases by next week, 40,000 cases in two weeks, and nearly 150,000 cases by the end of the month.

APOCALYPTICA is continuing to promote its latest studio album, "Cell-0", which was released in January via Silver Lining Music.