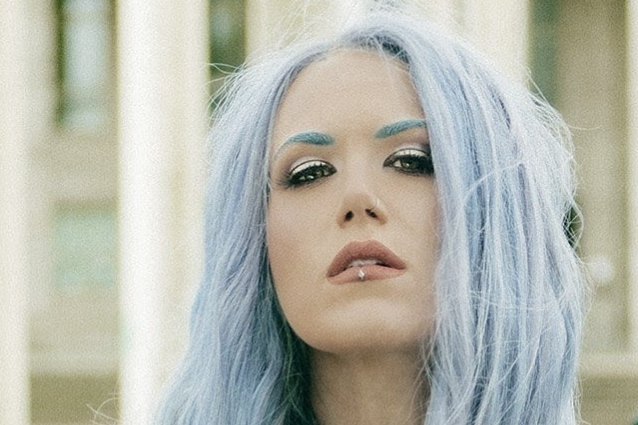 NO JOY, the project of Jasamine White-Gluz, sister of ARCH ENEMY frontwoman Alissa White-Gluz, will release its first full-length album in five years, "Motherhood", on August 21 via Joyful Noise and on Hand Drawn Dracula in Canada.

The official music video for the disc's new single, "Dream Rats", featuring a guest appearance by Alissa, will make its online debut this week. The song manages to cram synth choir, blast beats, cowboy leads, and signal-jammed shredding into a radio-friendly three and a half minutes.

Alissa stated about her collaboration with her sister: "We are very different in terms of personality and style but somehow ended up in parallel paths! Her music is shoegaze... a foreign world for me... but I see the level of attention to detail in her work and I love it!

"I don't know how it took our ENTIRE LIVES to collaborate (other than our childhood projects) but we finally did it! You'll all see it next week!"

NO JOY's relentless sonic permutations are evidence of frontperson and principal songwriter Jasamine White-Gluz's insatiable desire to grow. The Montréal-based project began a decade ago as e-mail-traded riffs; subsequent albums showcased a penchant for delay-saturated jangle, industrial distortion, and sludgey drones over disco beats. Jasamine, feeling too reliant on her primary instrument, ditched the guitars and detoured to modular electronica for a 2018 EP composed with Sonic Boom (SPACEMEN 3's Pete Kember).

For NO JOY's first full length in five years, Jasamine took what she learned from synthesis, reincorporated guitars, and produced an album that is not a departure from NO JOY's early shoegaze, but a stylistically omnivorous expansion that ekes into trip hop, trance and nu-metal. "Motherhood" is the culmination of years composing outside of her comfort zone, and a return to DIY recording with a leveled-up expertise in production. Touring with genre-divergent artists has honed the band's comfortably multifarious sound; NO JOY picked up post-hardcore fans on the road with QUICKSAND, and ambient techno fans on gigs with BATHS.

"As long as people are open minded about music, they can hear different things," explains Jasamine. "Maybe because there are a lot of layers."

Jasamine hadn't read Sheila Heti's "Motherhood" when she wrote and titled this record, but when she did, the narrative parallels between the two projects were "like looking into a mirror." "Will I regret not opening my insides out?" she sings on "Primal Curse", during which she reads an optimistic letter her mom wrote as a teenager to her future kids. "Time is critical, and you have to make decisions that are extremely time sensitive and your body doesn't care," she explains."It's a lot of seeing myself through my mother's experiences, and the physicalness of a body getting older." The album also investigates the implications of her parents' aging on her role as their child, as on the DJ-scratching wah groover "Four".

Heti's book's central conceit is an open-ended pondering of whether dedication to writing is more significant than the desire to have children. NO JOY doesn't definitively answer this existential quagmire, either — how could anyone? Instead, "Motherhood" is a beautifully dense exploration that proves how thoughtful, thorough music can translate into art that is rich, vast and alive.

Yet another new music video is coming next week! Did you know that my big sister @nojoy68jk69 is also a touring musician? 👯‍♀‍ She has an album called “Motherhood” coming out August 21st (next week!) and to kick it off we shot a music video for the song “Dream Rats”, which I sing on. We are very different in terms of personality and style but somehow ended up in parallel paths! Her music is shoegaze... a foreign world for me... but I see the level of attention to detail in her work and I love it! . I don't know how it took our ENTIRE LIVES to collaborate (other than our childhood projects) but we finally did it! You'll all see it next week! 🦆 Thanks @revolvermag for including “Dream Rats” in your list of best new songs! And if you still haven't seen the new music video for “Lizzie” you can join my FanClub (at the link in my bio) or @charlottewessels patreon page to watch! You can also listen to “Dream Rats” right now before the music video comes out, wherever you listen to music! Hope you are all enjoying the new music and visuals! 🎥🎬🎼🎤 . #nojoy #shoegaze #music #metal