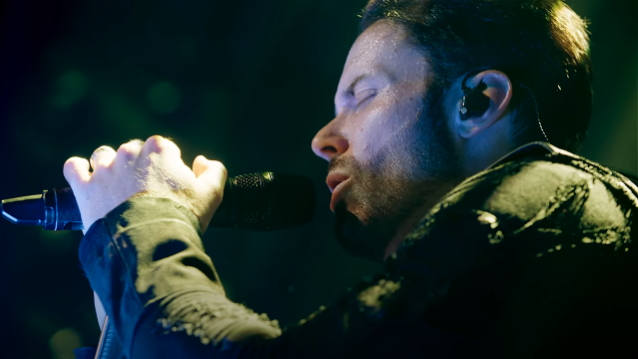 KAMELOT's TOMMY KAREVIK On Touring Post-Pandemic: 'People Will Be Starved For Music And Entertainment'

KAMELOT vocalist Tommy Karevik spoke to Bandbond about how he has been dealing with the coronavirus crisis and what the touring circuit might look like post-pandemic.

He said: "Everything's pretty much been business as usual for [KAMELOT]. Everything was planned this way when we had a kind of gap that we thought that we would work on the new album, and it's scheduled to be released next year. So we had this gap to work on it now.

"The way it works for, I think, most bands now is that you work the Internet way," he said. "And that's what we do. Except for I usually go down to Germany to put the bits and pieces together in the end with all the vocals and the last arranging and everything for the album. We don't know what that looks like yet.

"We've been pretty lucky. We didn't have a lot of touring scheduled for this year due to the work on the album, so it's been pretty good for us. We've been in a really lucky situation."

As for how he thinks concerts will be once the pandemic has subsided, Karevik said: "It's a little alarming. This just keeps on going — it kind of stretches out over time. When it all started, we thought that [it would last] a couple of months maybe, and now it looks like years maybe.

"It's not an amazing time to be an artist at this point. Of course, [if] you're gonna release an album, you wanna see all your fans.

"I don't know, to be honest — I really don't know," he admitted. "I think no one knows what it's gonna be like. But for sure, it's a little scary time to be depending on a vaccine, I think.

"I hope that when this ends — 'cause it will end at some point — I don't think it'll look the exact same as it did before COVID, but I think it's gonna get back to a good level of people being able to tour and stuff.

"I think people will be starved for music and entertainment, 'cause I think it's really important," Tommy added. "Even if that's the last thing to come back to people, 'cause it's not necessary to survive — it's not like food or a roof over your head — but it's more important, maybe, than you think for people to actually be able to see their favorite band or go to a social gathering. So I hope people will be coming out to the shows when it's time."

KAMELOT's new DVD and Blu-ray, "I Am The Empire - Live From The 013", was released on August 14 via Napalm Records. The 21-song set was recorded at 013 in Tilburg, Netherlands and includes more than 100 minutes of live music and multiple exclusive extras, including backstage interviews of all guests, bandmembers and fans. Featured guest musicians include Alissa White-Gluz (ARCH ENEMY),Elize Ryd (AMARANTHE),Charlotte Wessels (DELAIN) and Lauren Hart (ONCE HUMAN).

KAMELOT's latest album, "The Shadow Theory", came out in April 2018 via Napalm Records.

The first official book by and about KAMELOT, "Veritas: A Kamelot Legacy", marking the 30th anniversary of the founding of the band, will be released later this year via Rocket 88.