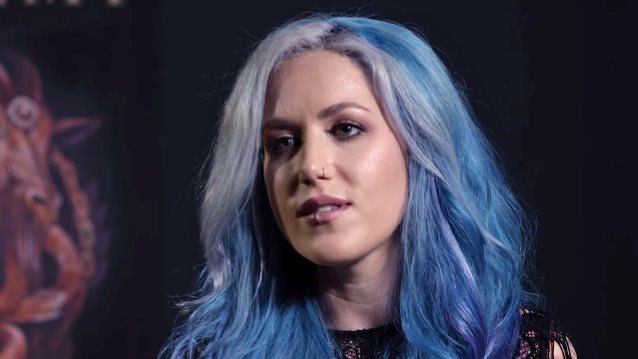 ARCH ENEMY's ALISSA WHITE-GLUZ: 'I've Never Felt Pressured To Be A Role Model For Anyone'

ARCH ENEMY singer Alissa White-Gluz recently spoke to Century Media Records about being vegan, social medi and staying grounded. You can now watch the chat below. A couple of excerpts follow (transcribed by BLABBERMOUTH.NET):

On whether she purposely tries to put her cruelty-free, vegan values across in her work:

Alissa: "I've been vegan for almost twenty years now, so it's a huge part of who I am. I've been vegan longer than I've been a singer. And it's definitely something that I try to put across in my work, but that's just because I really care about it. It's not because I feel that it's necessary or I think it's a good selling point or anything; it's just that's who I am, and so if I'm gonna be honestly singing, it's probably gonna be about something that I honestly care about.

"I think one of the reasons that ARCH ENEMY gels so well as people and musically is because we all share very similar values when it comes to human rights, animal rights… even politics, religion. We're all kind of on the same page, and so I have no fear that Mike's gonna write some lyrics that I don't feel comfortable singing; that never happens. Every time he gives me lyrics, I'm, like, 'Yeah! I wish I wrote this. This is great.' And when I write lyrics, likewise — I know that he's not gonna be, like, 'Well, we can't talk about this.'

"That's one of the great things about metal also. As soon as I started playing metal, I was, like, 'Ugh! Okay, well, everyone's gonna want me to shut up about this; they're just gonna want me to just focus on aggression and whatever. But, actually, it was the opposite — I quickly found out that people latched on to the fact that I was being authentic and that there was nothing wrong with being yourself, even if your values are maybe a little bit different than most of the people withint the community. I quickly realized that it was not only okay to talk about veganism and a peaceful way of living, but it was actually appreciated. So I'm lucky in that sense, but also I don't know if I could have done it any other way."

On the importance of tolerance and peace within the metal community:

Alissa: "When I first started playing metal, lyrically, I sort of related a little bit more to the punk and hardcore scenes, where there was a lot more veganism and straight-edge people and people taking a stance for causes that they believe in. There was a few bands that had more motivational lyrics that I thought was really cool and interesting to hear this juxtaposition between really aggressive-sounding music but then really a peaceful message.

"I think that metal has always been, in my opinion, the most passionate form of music, and it only makes sense to actually be passionate about what you're saying when you're delivering music to people, whether it's through an album or for a live show. And I think that maybe in the early stages of metal, there was… There was obviously classic metal where just being metal was something to be passionate about and there was lots of songs just about how metal we are and just praising the lords of metal. Which is also fun, because it does strengthen the community in a way. And then there's other bands that went more like a history lesson, where you're just sort of learning about different events that happened throughout global history, which is also kind of cool.

"No matter what somebody writes about, if they're passionate about it, it's gonna come through and I think it's gonna read very well. But I think that right now the world is in a sort of state of uproar and rebellion, and it only makes sense that music that has always been about that is sort of joining with those causes right now."

On whether she feels pressure to be a positive role model for younger fans:

Alissa: "I've never felt pressured to be a role model for anyone, but I do think that I live in a way that is respectful and admirable, and if that inspires people to also live that way, then that's great. I get a lot of messages from people asking questions or just thanking me for the music or [saying] they've gone vegan or they beat alcoholism, or whatever it might be, and I'm more than happy to be that example. I've always believed in… In literature, there's this thing, 'Show, don't tell,' and leading by example. And I do think that there's a lot to be gained from being just a conscious individual and being awake in life and not just following social norms — really being your own person — and that's just who I've always been; even when I was eight years old, I was kind of like that. And I think that if it's possible to be a role model that doesn't value what a lot of really popular role models value in terms of just really superficial things… That, to me, is really irresponsible — when you have a huge public platform and you use it just to promote materialism and things that really don't matter and don't improve the world or people in any way. I think that's pretty irresponsible, so I do try to use whatever voice I have to make a difference, but it just comes naturally."

ARCH ENEMY's new album, "Will To Power", will be released on September 8. Co-produced by guitarist and band leader Michael Amott and drummer Daniel Erlandsson, the disc was mixed and mastered by longtime collaborator and friend Jens Bogren (OPETH, AT THE GATES, DIMMU BORGIR). The album's captivating cover artwork was designed by Alex Reisfar.