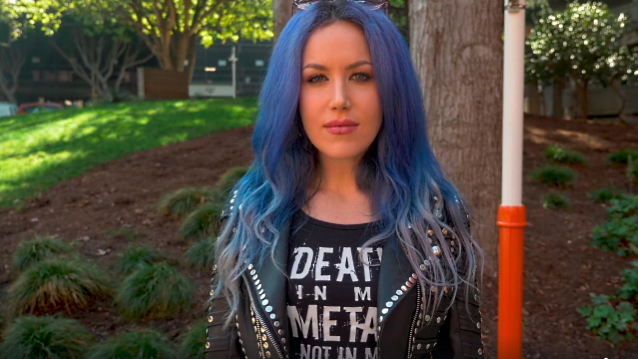 The Mercy For AnimalsFacebook page has uploaded a video in which ARCH ENEMY singer Alissa White-Gluz explains why being vegan is definitely metal.

In the one-and-a-half-minute clip, which can be seen below, Alissa states: "So, I've been vegan for over 20 years now. I was vegan before I ever started in music. I've never eaten meat in my life. I grew up in a completely vegetarian household, so going vegan was just like the logical next step. And when I started doing music, there was nothing that I wanted to talk about more than animal rights. And so I was now using this heavy, passionate form of music to sort of convey a message that I wanted to. When I'm screaming in my band, I feel like I'm screaming for the voiceless. And I can't imagine being that loud if I had nothing to say.

"Being female, being vegan and also being straight edge in the metal world is just a combination of targets on my forehead that make it really easy for me to get singled out or pushed around," she continues. "But those are just things that are so much a part of who I am that I couldn't change them even if I wanted to. And I wouldn't — I wouldn't change for anyone.

"In my opinion, metal is all about rebellion — it's about carving your own path, thinking against what everyone's trying to make you think," Alissa adds. "And veganism is the ultimate form of rebellion, because you are literally taking things that people have told you are normal that deep down inside you don't think are normal that you've been conditioned to accept about your day-to-day tasks, like eating or what you wear or what you choose to buy. Everyone says that that's normal, that you need to exploit other living beings for those things, but you don't. And so taking a stand against that is what veganism is. And that is really metal."

Nearly a decade ago, Alissa snagged a Libby Award in the category of "Breakthrough Artist" from peta2, PETA's youth division. The annual Libby Awards ("Libby" is for "liberation") honor animal-friendly people and products.

White-Gluz took a stand against the universally condemned annual seal slaughter in her native Canada by shooting a striking peta2 ad that showed her above a photo of a baby seal who was about to be clubbed and read, "Bang Your Own Head, Not a Seal's." She also spoke out against the fur industry, and she encouraged everyone to buy only cruelty-free personal-care products.

Lead singer Alissa White-Gluz of the band Arch Enemy tells us why being vegan is definitely metal. 🤘