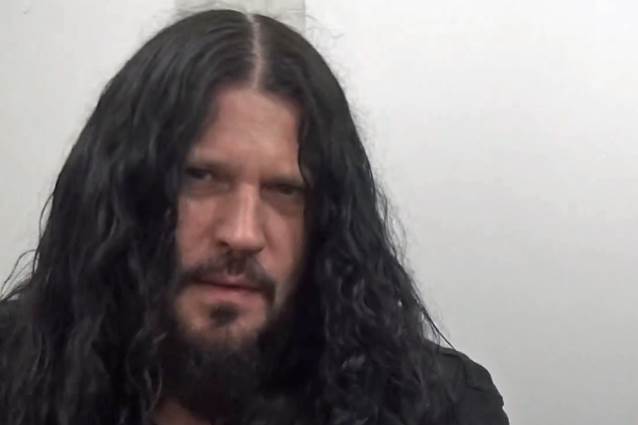 ARCH ENEMY's SHARLEE D'ANGELO On Band's Musical Evolution: 'We Haven't Changed That Much'

Finnish Heavy Metal Fans recently conducted an interview with ARCH ENEMY bassist Sharlee D'Angelo. You can now watch the chat below. A couple of excerpts follow (transcribed by BLABBERMOUTH.NET).

On ARCH ENEMY's musical evolution over the years:

Sharlee: "Well, there's been the obvious few lineup changes — on the guitar and vocal position, a few things have happened. I don't know… It's been a ride. It's hard to say, for me, how it changed or not. Musically, if you look back, yeah, we have changed a little bit. But, then again, if you haven't changed a little bit over 20 years, then something's wrong with you. But we haven't changed that much; we haven't gone into some other weird type of music — it's still the same type. It's just that we just try to develop as much as we can within our own little world."

Sharlee: "The thing is I don't care. We had one vocalist for many years, she left the band, and now we have a new one. It's difficult to change singers, because it could go either way; it could really destroy a band's career. But for us, it's been the other way around; things actually have really, really gone up since Alissa joined the band, which could have, of course, to do with her, but also, I think, we went on a slightly different path musically as well. And it's many, many things that build up to things. But if people compare, they can do that. I do it also with my favorite bands. If they change whatever member, [I think to myself] 'I like that better than the new one.' It's natural. But it's not for me; that's for people to do. I'm not part of their discussion."

On ARCH ENEMY constantly being referred to as a "female-fronted" band:

Sharlee: "I just think people are talking about it like it's a genre of music when it's not. There are female-fronted metal bands, and most of them sound very, very different to each other. I mean, WITHIN TEMPTATION, LACUNA COIL, NIGHTWISH and ARCH ENEMY… So it's a stupid thing. But I think it's just because female metal singers are still in minority, so people still see it as a bit of a novelty. But there's more and more women coming up, not only vocalists but metal musicians, which is good. So I think hopefully in a few years we won't even have this discussion and 'female-fronted' won't even be a word anymore; it'll just be 'human-fronted.' [Laughs]"

ARCH ENEMY will embark on the "Will To Power" U.S tour this fall. Support on the trek will come from GOATWHORE and UNCURED. The 22-city tour kicks off on September 28 in Providence, Rhode Island, hitting major markets along the way, before culminating at the iconic Starland Ballroom in New Jersey on October 27.

"Will To Power" marks the second ARCH ENEMY album since the departure of Gossow and addition of White-Gluz. It is also the first ARCH ENEMY disc to feature former NEVERMORE guitarist Jeff Loomis, who joined the band in late 2014.