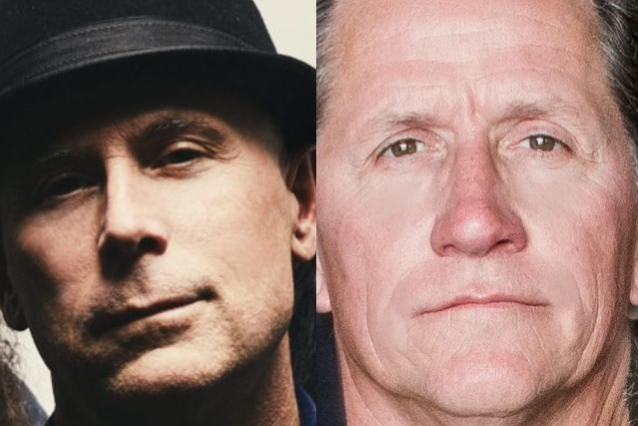 ARMORED SAINT's JOHN BUSH On His Friend MIKE HOWE's Suicide: 'I Wish He Would Have Just Called Me'

ARMORED SAINT's John Bush has reflected on the recent passing of Mike Howe, saying the METAL CHURCH singer was "a really nice guy and a genuine person."

Bush discussed Howe's passing during a recent interview with "I Ask No One With Kevin Re LoVullo". He said (as transcribed by BLABBERMOUTH.NET): "I couldn't believe when I heard the news about [Mike] passing away recently. We had just [done] a tour with METAL CHURCH not too long ago — we went to play a bunch of dates in Europe with METAL CHURCH, some festivals as well as a lot of headline shows together. And we did some shows out here in America as well on the West Coast — we played Portland, Seattle, San Francisco and L.A. And Mike was just an incredible singer — powerful voice, great vibe.

"I'm still pretty flabbergasted about his passing; I just can't believe it," he continued. "We shared a bus recently, and we did a bunch of interviews together 'cause people wanted to interview the two singers when we were on tour together. I'm really bummed about that one. I don't know what to say.

"I've heard that he took his own life, and, man, I wish he would have just called me. 'Cause we did chat after the tour. He has his older son. I think his son was playing college football, and he was super proud of his kids. That one really, really hits me hard.

"Mike was one of those guys — he was just a nice man; he was just a good guy," John added. "In the music business, you meet a lot of pricks — in bands and out of bands and agents and managers, whatever. But he was a good guy. He was a really nice guy and a genuine person. And that one really bugs me."

TMZ stated that cops in Eureka got a call just after 10 a.m. on July 26 reporting an unexpected death at a home. By the time deputies arrived, they found Howe dead at the scene.