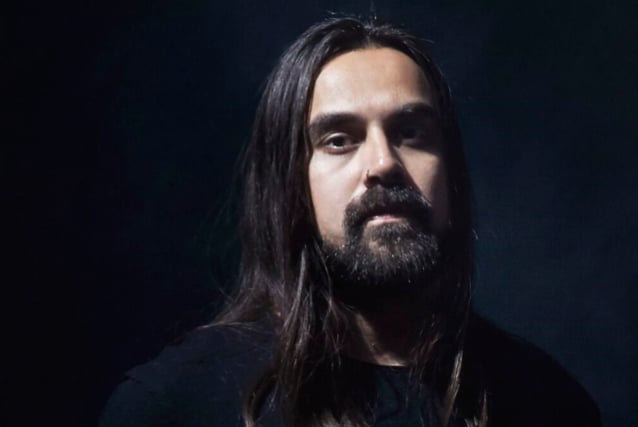 ART CRUZ On His First Album With LAMB OF GOD: 'I Did My Best To Be Able To Be Myself'

Asked by Outburn what his mindset was coming into a major band such as LAMB OF GOD and replacing Adler, Cruz said: "Chris was one of my favorite metal drummers growing up. It hits close to home for me. The idea of this is all surreal and it's very mind-boggling. It's very much a dream come true that I can continue to say constantly, and I will say it forever because it's exactly what it is. To go into it as I did, I've been growing as a musician from start to finish. With bands like WINDS OF PLAGUE, I learned a lot of different things in that group. And then jumping to a band like PRONG that is also a legacy metal band and had been around for so many years, you learn so many different things. To be able to come in and have to fill the shoes of somebody like Chris Adler, you get a little nervous and things like that. But I was confident with the skills that I learned over the years, and having to deal with so many different ranges of personalities, it helps. Again, you can only be nervous, but you can only be yourself. Thanks to the guys for letting me do that. That was the only reason why I was able to fully bloom. We've been dabbling around with different ideas. Now we're obviously on creative mode with the shutdown of the industry and touring not existing. It's crazy that I have such a different approach, now that I got it out of the way with this new record. So, it was a challenge. It was very scary. I'm watched through a magnifying glass since I entered this band, even as a fill-in. So, I'm thankful for everything from start to finish, for sure.

Speaking about his drumming approach on "Lamb Of God", Cruz said: "LAMB OF GOD has such a signature sound that you cannot drift from, but that sound is a collective now. It's not just a Chris Adler sound or just a Mark Morton sound or just a Willie [Adler] sound. It's very much a collective effort. I did my best to be able to be myself, but at the same time, I grew up idolizing these guys and their music. So, I wasn't very far off with keeping that sound what it was. I do pay some homage to Chris Adler, because, again, he's my favorite metal drummer. So, at the end of the day, there were times that I felt like I had to turn the fire up, bring the fire down, and play for the band. I feel like a lot of drummers, musicians, and fans expected me to go above and beyond, to maybe try and outshine somebody like that, but that wasn't the goal from the start. Thankfully, my education and growing as a musician helped me discipline myself like that. Because I'm playing for and with LAMB OF GOD, it's not the Art Cruz show. So, there were times that they gave me time to shine for the music and for the songs. We came up with a lot of stuff in the studio, and, thankfully, we did drums last. I think it was very beneficial for me to go last. To understand and know that the guys were happy with where the songs were, their parts were done, and this is what they wanted. So, I was able to play along with things like that. I brought them groove like what I learned while playing in PRONG. I brought some intensity that I had when I was playing with WINDS OF PLAGUE. It shows my growth as a musician as well, and I think it really meshed a lot with the traditional LAMB OF GOD sound."

Read the entire interview at Outburn.