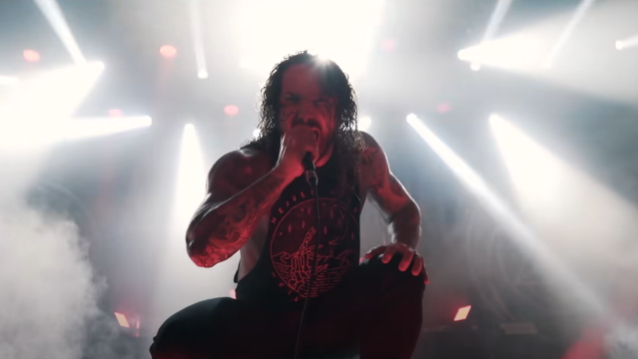 AS I LAY DYING has just completed the U.S. leg of of the "Two Decades Of Destruction" tour. The trek, which kicked off on June 10 in Las Vegas, Nevada, marked the band's first with its new touring lineup, featuring founding vocalist Tim Lambesis and longtime guitarist Phil Sgrosso alongside drummer Nick Pierce (ex-UNEARTH),bassist vocalist Ryan Neff (MISS MAY I) and guitarist Ken Susi (UNEARTH).

Earlier today, AS I LAY DYING released the following statement via social media: "Phil and Tim cannot express the level of appreciation for having Ken, Ryan, and Nick out with us this first tour back.

"AILD found itself in a pretty complicated situation during the pandemic to keep the band afloat however possible. There was a lot of stress and uncertainty whether we'd find a team of guys that we could trust to perform at the level this band calls for and that could sustain a positive working/living environment to ensure everyone's happiness in being a part of this potentially long term.

"It was a true joy to look over onstage and see smiles on everyone's faces or even see them shake off a mistake and get back into the zone to keep the good vibes rolling. It feels good to see members laughing and smiling before and after a show. At times, we were tough on ourselves only because we wanted to do our very best every moment of each night. We got through the tough moments together. It's been really good to have guys who's [sic] communication approach connects at our level with true professionalism.

"We look forward to continuing this relationship with Tim, Phil, Ken, Ryan, and Nick all being involved so we thank everyone who continues to support AILD carrying on with high hopes for the future".

Last month, longtime AS I LAY DYING drummer Jordan Mancino announced that he would sit out the band's tour due to "a number of ongoing internal issues" that "have not yet been resolved."

Mancino's announcement came less than a month after AS I LAY DYING's longtime bassist/vocalist Josh Gilbert revealed that he was leaving the band. In a statement, the remaining members of AS I LAY DYING said that Gilbert "decided to exit" the group "to pursue other musical opportunities."

A post shared by As I Lay Dying (@asilaydying)