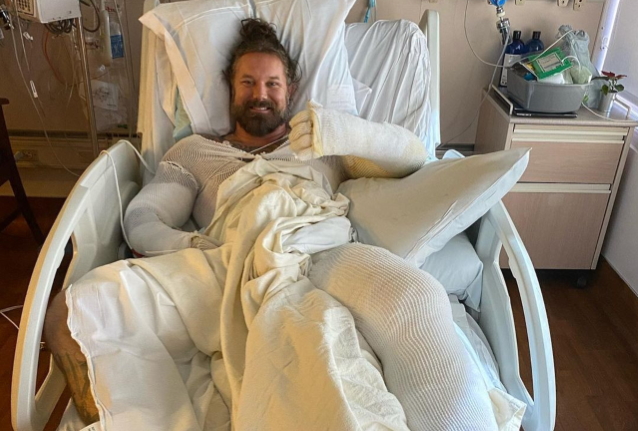 AS I LAY DYING frontman Tim Lambesis says that his "man parts" were spared when he sustained burns to 25 percent of his body in a freak accident last month.

On December 16, the 40-year-old singer revealed that he had been pouring gas into a bonfire when the top slipped off and the liquid ended up getting all over his clothes, setting him on fire.

On Sunday (January 3),Lambesis posted a new video update to his Instagram in which he revealed that some crucial parts of his anatomy were unaffected in the incident.

"Hey everybody, I wanted to give a recovery update," Tim said. "Today actually marks the first day in a little over three weeks that I've been out of bed for most of the day. And yesterday was actually the first day they changed my dressings without having to scrub my wounds. That's a huge relief because scrubbing my wounds is by far the most painful part of the recovery process."

He continued: "I'm very, very thankful my face did not get burned. And for whatever reason — it's a very common question, so I should let you know — my man parts did not get burned. I did lose 20 pounds from being stuck in bed for three weeks. And I do have shakes, as you can kind of see, from my nerves reconnecting. It's not really something I can control quite yet, but I will get it all back together. And I just am very, very thankful for everybody that wrote me."