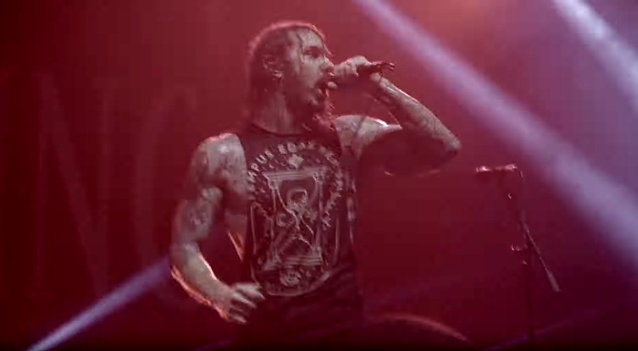 AS I LAY DYING: Pro-Shot Video Of 'Confined' Performance From 2018 European Tour

Professionally filmed video footage of AS I LAY DYING performing the song "Confined" during the band's 2018 European tour can be seen below.

AS I LAY DYING's seventh album, "Shaped By Fire", will be released on September 20 via Nuclear Blast Records. The disc was produced by the band and was mixed by Joseph McQueen at Sparrow Sound in Los Angeles, California, while mastering was completed by Ted Jensen at Sterling Sound in Nashville, Tennessee. The only exception was for the track "My Own Grave", which was produced by AS I LAY DYING, co-produced by Drew Fulk and mixed by Adam "Nolly" Getgood. The artwork was created by Corey Meyers.

AS I LAY DYING will embark on the "Shaped By Fire" U.S. headlining tour in the fall. Support on the trek will come from AFTER THE BURIAL and EMMURE.