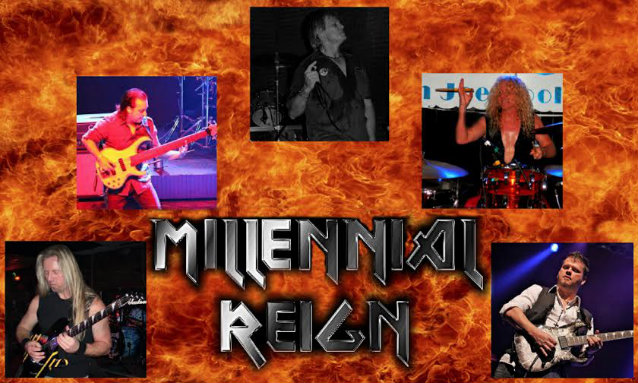 MILLENNIAL REIGN, the project led by ASKA bassist Dave Harvey, is putting the finishing touches on the songwriting process for its sophomore album, tentatively titled "The God Particle".

Whether MILLENNIAL REIGN will seek label support or release independently is still yet to be decided.

A rough demo version of song that will appear on the upcoming disc, "Not On My Own", can be streamed using the ReverbNation widget below.

Formed as Harvey's solo project, MILLENNIAL REIGN released its debut album in January 2012. All guitar, bass and keyboard tracks for the CD were written and recorded by Harvey. Also performing on the effort were vocalist Trae Doss and drummer Bryan Diffee.

After seeing the interest in MILLENNIAL REIGN's first album, Dave expanded the project into a full-fledged band. Joining him in the group's current lineup are lead vocalist James Guest (EDEN'S REALM), guitarist Mike Hamill, bassist Neil Bertrand and drummer Michael Feighan, who is well known for his work in "white" metal bands WHITECROSS and KING JAMES.

Two more MILLENNIAL REIGN demo songs will be released after they are finished.

ASKA, fronted by vocalist/guitarist George Call (ex-OMEN, BANSHEE, VIOLENT STORM), has been together more than 20 years, has played in over 40 countries and is signed to Pure Steel Records, based in Schwarzenberg, Germany.