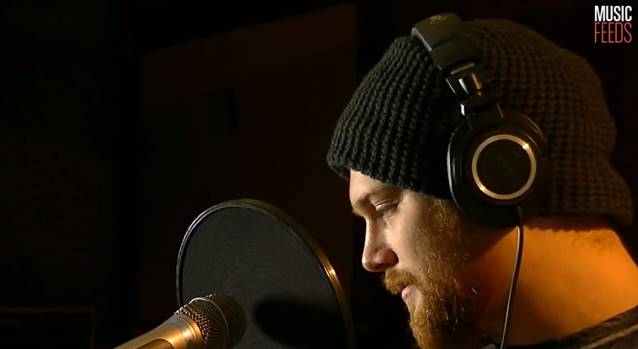 British metalcore act ASKING ALEXANDRIA recently took part in an interview and acoustic performance at the studios of Australia's Music Feeds. Check out the footage below.

ASKING ALEXANDRIA's third album, "From Death To Destiny", sold 38,000 copies in the United States in its first week of release to land at position No. 6 on The Billboard 200 chart.

In a recent interview with Kill Your Stereo, ASKING ALEXANDRIA guitarist Ben Bruce stated about the band's musical progression on "From Death To Destiny": "When we recorded 'Stand Up And Scream', we were kids — we were 17 to 19 years old. We all loved '80s music then. [However] I don't think we were brave enough or competent enough to show our passion for '80s rock back then at the time. With 'Reckless And Relentless', it was the same thing; there was a little bit more of it and you could see our '80s rock 'n' roll love coming through, but again, I don't think we had the balls to go out and fully do it. But this time around, we sat down and intentionally said, 'OK, we want to show our love of '80s music in this record.' But we don't want it to sound like a regurgitated '80s album because we've been there, we've done that. It wouldn't be fun, it wouldn't be fresh and it wouldn't work, so we had the challenge to try and incorporate modern day rock and metal into our love and passion for the '80s. I think we did a really did a good job of it."

Asked how important social media is in promoting a band like ASKING ALEXANDRIA, Bruce said: "I think it's a vital part of promoting a band. There are so many different bands out there. It's not like back in the day where you were put in a magazine and everyone would subscribe to that magazine. You knew lots of people were going to read about you in a magazine. These days, magazines still sell but they've taken a huge hit, just as record sales have. The biggest platform anyone has these days to release any information regarding whatever it may be, for instance, our new album, is the Internet. The harder you work at that and try and connect with your fans, the more they feel a connection with their favorite band and therefore the more interested they become. It grows. We have 3.5 million followers on our Facebook page, which is a shit-ton of people. [laughs] You can't even imagine 3.5 million people. Although it's just a number on a screen, essentially you are writing a letter to each one of these people to tell them about our album coming out or we'll be playing this city on this day, so I think it's absolutely vital these days to make the most of your social networking."