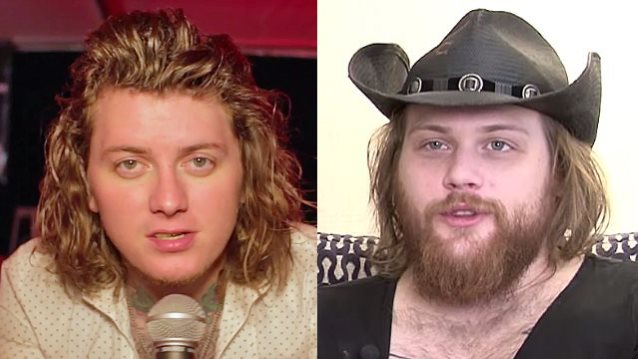 According to The Pulse Of Radio, ASKING ALEXANDRIA guitarist Ben Bruce and former singer Danny Worsnop have apparently ended their beef that began when Worsnop abruptly quit the band in early 2015. Worsnop tweeted on Sunday (September 18) that he and Bruce "partied old school style" while drinking "almost a handle of Jameson." Bruce later posted on Twitter, "Me and Danny were best friends for a decade, we have rekindled our relationship."

Bruce also squashed rumors that he had unfollowed current ASKING ALEXANDIA frontman Denis Stoff, writing, "I haven't unfollowed anyone in my band. I don't run Denis' social media so I don't know what his posts are about! I'm not in an argument with anyone. All these random stories going around are so strange!"

Worsnop officially quit the group in January 2015, and Bruce admitted in an interview a few months later that he was stung by Worsnop's exit, saying, "I was fucking pissed off, man. The guy was my best friend, and he just kind of turned his back on me and fucking bailed."

Worsnop later slammed the group, telling Alternative Press in May: "I ended up leaving [ASKING ALEXANDRIA] because it lost the art to me. It lost its artistic integrity in my eyes. It was just selling out and that's not what I do."

Bruce responded a short time later, telling Loudwire: "We've done what we've always loved to do since Day One. We didn't change. He did. So, for the fact that he can sit there and say that, I think it's bullshit. It's not true."

ASKING ALEXANDRIA's first album with Stoff, "The Black", was released in late March of this year and features the single "Here I Am".

Worsnop has focused on his other band, WE ARE HARLOT, and is promoting his new country-leaning solo album, "The Prozac Sessions".