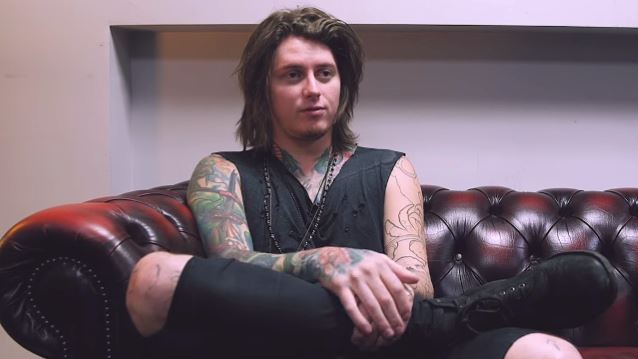 According to The Pulse Of Radio, ASKING ALEXANDRIA guitarist Ben Bruce is offering a look into the life of a new rock 'n' roll dad on a new web series called "The Daddy Diaries". The series will premiere Thursday (December 1),on Bruce's YouTube channel and will feature his girlfriend Ciara and their daughter Fae Holley Bruce, who was born on September 10. The first five episodes will be available right off the bat, with more to come chronicling the baby's first few months and how Bruce deals with them.

ASKING ALEXANDRIA's first and only album with Shaforostov, "The Black", was released in late March of this year and features the single "Here I Am".

Bruce explained recently that after a tour earlier this year, Shaforostov went home to Ukraine and the rest of the group headed to Los Angeles to begin working on new music — after which Shaforostov did not respond to emails or texts.

With several tours coming up, the band decided to carry on without Shaforostov and regroup with Worsnop.