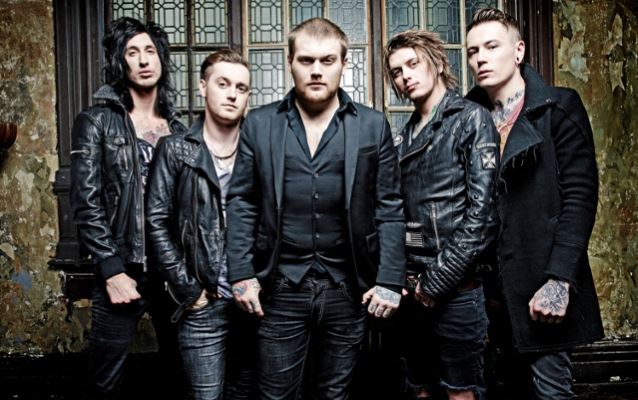 Genre-bending U.K.-based rock group ASKING ALEXANDRIA will release "Live From Brixton And Beyond", a 2-disc concert DVD, on December 15 via Sumerian.

"At long last, we are FINALLY releasing our first-ever DVD," says ASKING ALEXANDRIA guitarist Ben Bruce. "We have been promising this DVD for a long time now, but trust me when I say it was worth the wait. There is so much unseen footage on this release, including our sold-out show at Brixton in London, our reckless Halloween concert in Hollywood, intimate behind-the-scenes footage, the 'Through Sin And Self Destruction' short film and every music video we have ever recorded. It's been a long time in the making but we hope you enjoy every second of this. Thank you all so much for your love and support over the years and welcome to the family."

The "Live From Brixton And Beyond" 2-disc DVD features: 1) the full live set from ASKING ALEXANDRIA's sold-out Brixton 02 Academy show in London, England; 2) behind-the-scenes and backstage footage from the Brixton 02 Academy show; 3) the unseen "Reckless Halloween" performance at The Wiltern in Los Angeles; and 4) all of the group's music videos and the "Through Sin And Self-Destruction" short film.

"Live From Brixton And Beyond" 2-disc DVD:

* Welcome
* Closure
* A Lesson Never Learned
* Breathless
* Not the American Average
* A Prophecy
* If You Can't Ride Two Horses at Once...You Should Get Out of the Circus
* Dedication
* Someone, Somewhere
* Another Bottle Down
* Reckless & Relentless
* To the Stage
* Dear Insanity
* Run Free
* Morte et Dabo
* Alerion
* The Final Episode (Let's Change the Channel)

* Welcome
* Closure
* A Lesson Never Learned
* Not the American Average
* I Was Once, Possibly, Maybe, Perhaps A Cowboy King
* Morte et Dabo
* Alerion
* The Final Episode (Let's Change the Channel)

* Not The American Average
* Breathless
* The Death of Me
* Killing You
* Moving On
* If You Can't Ride Two Horses At Once...Then You Should Get Out Of The Circus
* Run Free
* Closure
* A Prophecy
* The Final Episode (Let's Change The Channel)