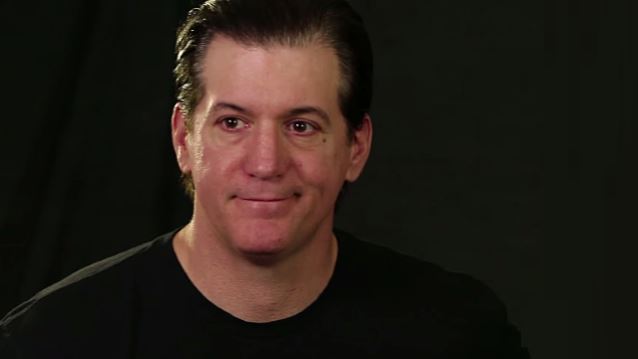 MarshallofRock.com conducted an interview with guitarist Keith Nelson of Californian rockers BUCKCHERRY on November 7 at The Ranch in San Miguel, California. You can now listen to the chat using the SoundCloud widget below.

Asked how BUCKCHERRY is dealing with the drastic changes in the music business in recent years, Nelson said: "I think it's pretty common knowledge that the income streams for working musicians are diminishing, so you have to be very creative about what you have to do — not to live a lavish life of a rock star, but to support your family and maintain a life outside of it. 'Cause, believe it or not, we actually do have lives [away from the band]. We do our laundry, we go grocery shopping, we do all the things normal people do. [Laughs] So, looking at that aspect of it, it's forced us to constantly rethink how we're making the music, how we're putting it out, how we're reaching people, and why would somebody buy our record and not someone else's? Just how you make it special. So I think that's why you see things like bonus CDs with records that we've made, behind-the-scenes content, things like the PledgeMusic [campaign], things like that… That stuff's really, really important to us. At the same time, we still wanna be making records that are current, modern and are talked about in the modern vernacular of rock and roll."

Nelson also spoke about BUCKCHERRY's approach to touring and how declining record sales have affected the band's desire to keep working on the road.

"If you look back at 2005, 2006, 2007, before what someone called the crash of the business, we did 315 shows in support of the '15' record," he said. "So our attitude towards touring hasn't really changed that much. We wanna play as often as we can for as many people as we can, and we wanna be as successful as we can, but we don't wanna do it at the expense of sacrificing the live show or the content that people get. That's not worth it."

The Truth Tattoo Care Kit is a revolutionary kit featuring Tattoo Balm, Gentle Tattoo Cleanser and Moisturizing Tattoo Lotion. Important aspects of care and protection were considered during the development of this kit. The Tattoo Balm is formulated with protective oils and Shea butter to be used right after having tattoo artwork completed. The Gentle Tattoo Cleanser will help keep fresh tattoos clean while healing. And the Moisturizing Tattoo Lotion is a clean, non-sticky formula to intensify colors and accentuate tattoo artwork.

BUCKCHERRY in August released a new EP, simply titled "Fuck", via the band's newly established F Bomb imprint. Each of the six songs on the disc has the F-word in the title, including "Somebody Fucked With Me", "I Don't Give A Fuck" and the first single, a cover of Icona Pop's hit "I Love It", re-imagined as "Say Fuck It".