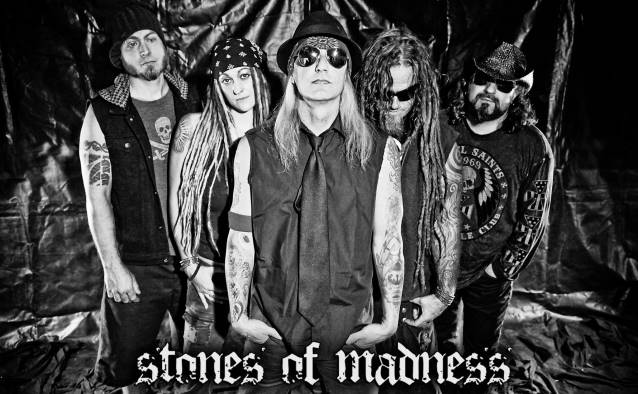 "Hostility", the new video from STONES OF MADNESS, the band formed by Scott Thompson (DRY KILL LOGIC) and ATHEIST/NEUROTICA frontman Kelly Shaefer, can be seen below. The song comes off the group's upcoming, self-titled EP, which was recorded at Timeline Studios in Ft. Myers, Florida with producers Scott "Scoob" Bush (former guitarist of THE NIXONS) and Thompson. A late 2013 European release via the Berlin, Germany-based label U-Motion is expected.

The "Hostility" clip was directed by STONES OF MADNESS guitarist Shawn Bowen and the rest of the band, and was shot in the group's hometown of Sarasota, Florida. The song is described in a press release as "an anthemic, harmony filled track full of piss and vinegar, lyrically entertaining the bitterness relationships seem to conjure up."

STONES OF MADNESS is a slightly different venture for Scott, Kelly, Shawn and G.J. who come from more aggressive metal backgrounds. But this project shows how truly diverse their influences really are.

Kelly previously described the STONES OF MADNESS material as "big thick guitars, along with some fucking big catchy vocals.... bashers to sing along with, cranked to 11, of course."