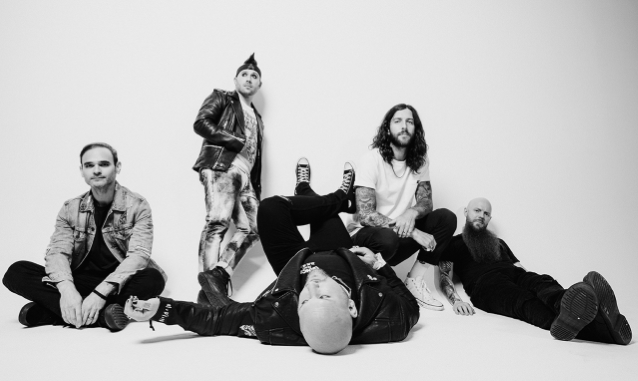 California metallers ATREYU have released the official music video for their new song "Warrior" (featuring BLINK-182 drummer Travis Barker). The track is taken from the band's upcoming album, "Baptize", which is due on June 4 via Spinefarm Records. The clip arrives five months after the release of "Save Us", which was the first taste of the band's music since the departure of vocalist Alex Varkatzas in September.

"Warrior" and "Save Us" showcase ATREYU's current lineup consisting of drummer Brandon Saller focusing completely on singing after previously sharing lead vocals with Varkatzas for most of the band's two-decade-plus existence. Sitting behind the kit is Saller's HELL OR HIGHWATER bandmate Kyle Rosa, who had filled in for Saller on drums in 2019 after Varkatzas bowed out of the band's European tour while dealing with serious back and hernia issues.

ATREYU said: "Sometimes life punches you in the face. The fist hurts — and the floor hurts worse. But getting back up feels incredible. 'Warrior' is a song about the war within. There is a daily battle inside all of us, as well as the knowledge that we each have the power to not only get back up, but also have the fire we need to thrive and burn brighter than ever."

The band previously stated about the track: "'Warrior' is song about persistence and never giving up. We hope this song can be the puzzle piece that helps people realize that we ALL have the capacity for greatness. Sometimes, greatness can exist in the shadows and lives buried under negativity, trauma, or anxiety. 'Warrior' is about searching through all of that endless darkness to finally find the sunrise.

"When we wrote 'Warrior', the idea to do a big marching drum break came about. We wanted it to feel like a hometown football game. Travis Barker was the perfect person to bring this to life. It's cool to have him be a part of the song and to perform in a different light than what people may be used to."