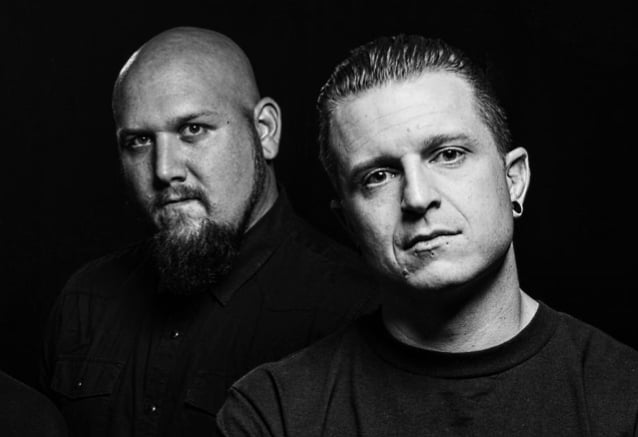 In October, California metallers ATREYU surprise-released a new song called "Save Us". It was the first taste of the band's music since the departure of vocalist Alex Varkatzas a month earlier.

A couple of days before "Save Us"'s release, Varkatzas updated his Instagram stories with hashtags that seemed to throw shade at his former bandmates and their new material: #fakeheavy, #conartists and #justwaitandsee.

ATREYU's former drummer Brandon Saller, who is now focusing completely on singing after previously sharing lead vocals with Varkatzas for most of the band's two-decade-plus existence, discussed Alex's departure from ATREYU in a new interview with Terry "Beez" Bezer of Knotfest.com's "Mosh Talks With Beez". Asked what he thought of Varkatzas implying in a social media post that "Save Us" was "fake heavy," Saller said (see video below): "I thought it was hilarious, because I think everyone heard it and then was, like, 'Hmm. Okay.'

"The four of us were very, very adamant on this whole thing" — referring to the split with Alex — "being very, very positive. There's no shitting on people that we wanna do. There's not a part of us that wanted anyone to shit-talk us or him. And our whole stance was, like, this is what it is, but we can still lift each other up and make our fans feel good about the fact that there's no beef; there's no whatever.

"He did his own thing, and it wasn't exactly the kind of idea of a narrative that we would have liked to put forward," Brandon continued. "We've always, still to this day, been fully positive. When people say stuff about Alex, I'm still, like, 'The dude's awesome. You should support whatever he does next.' He's learning guitar, he's taking interest in different things, and I will still, till I'm blue in the face, say, yeah, support him. If you like his voice, if you like what he did in ATREYU, he's probably gonna make more music. Now you have two bands you can listen to.

"The 'fake heavy' thing was — we don't know where that came from," Saller added. "Alex wrote 'Save Us' with us. He wrote probably seven, eight songs that are on the next record. He was a part of the beginning of the album, so for him to say it's fake heavy, then he wrote a fake-heavy song.

"I think 'Save Us' is one of the heavier songs we've ever written. It is two and a half minutes of facepunch. Another view we've had is no matter who says what, let's do what we've always done and just let the music talk. We're just gonna continue doing that and let the tunes do all the talking. And people will know what we're all about. They'll know everything they need to know from [listening to] the songs."

According to Brandon, he and his ATREYU bandmates wanted to avoid making the split with Alex more dramatic than it needed to be in the eyes of the public, preferring instead to give everyone a taste of the new music they were working on.

"A lot of people got really butthurt because of the lack of detail that we gave [in our statement announcing Alex's departure]," Saller said. "And I feel like we just felt so strongly that in this day and age, click culture and clickbait, every headline's looking for, 'Guitar player of ATREYU slept with the singer's wife' — some weird drama. But we had no interest in that. We just wanted to keep it about the music and keep it positive and let our fans know that this is what's happening, we're separating, it is what it is, and let's just think about the future."

"I think people think a lot of it is a lot more quick than the reality," Brandon theorized. "I think that people think that we just made this decision and posted it on the Internet, and that was it. But we've been going through this for months and months and months. When you're in a business and a relationship — a marriage, essentially — with someone for 20 years, there's a lot of steps to go through before you can say anything. We were very much wanting to say really nothing — just be positive and let's be adults. And luckily, we have so many people that really, really are showing us a lot of love."

Sitting behind the kit for ATREYU now is Saller's HELL OR HIGHWATER bandmate Kyle Rosa, who had filled in for Saller on drums in 2019 after Varkatzas bowed out of the band's European tour while dealing with serious back and hernia issues.

Last month, Brandon implied in an interview with "Sappenin' Podcast With Sean Smith" that ATREYU was no longer on speaking terms with Varkatzas: "We'll call it a breakup," he said. "There's obviously a separation, so I think that's something that, in our hopes, the future will heal. But the five of us in the current situation are tighter than ever."

Two months earlier, Brandon explained to "Cutter's Rockcast" why ATREYU decided against bringing in a new vocalist to replace Varkatzas.

"A new voice, I think, would completely shatter people, whereas I think just having me — everyone knows me, every ATREYU fan knows my voice and knows what it is in the band, and it's still there," he said. "And we just integrated Porter [bassist Marc McKnight] doing a lot more of the screaming stuff. I'm doing some of the screaming stuff on [upcoming] the record, but most of it's Porter. If you know our last five records, you know his voice too. Since he's been in the band, he's been screaming on records and he's been in the mix. So it still felt really familiar. We're trying to take ourselves outside of the band and put ourselves in the fans' shoes. And this still feels so much like ATREYU, and I feel like we're stronger than ever. And it feels good, and we all are so excited for this."

Regarding the aggressive nature of "Save Us", Saller said: "I think a lot of people expected us to, for some reason, put out a pop album. It's probably the heaviest record we've made in a long time. And that's not to say there isn't some freakin' pop-style stuff on there — there is, just like every other ATREYU record. Every record we've done for the past decade-plus has had those moments, and that's always been the band we are. It's brutal, and it still feels like ATREYU to me.

"This isn't a slight on Al at all, but not everyone lives and breathes on the Internet," he added. "There's a lot of people that will hear this just on the radio and will have no idea, because it's not a crazy departure style-wise."

ATREYU's new album, which is "done and dusted," according to Saller, will arrive later this year.