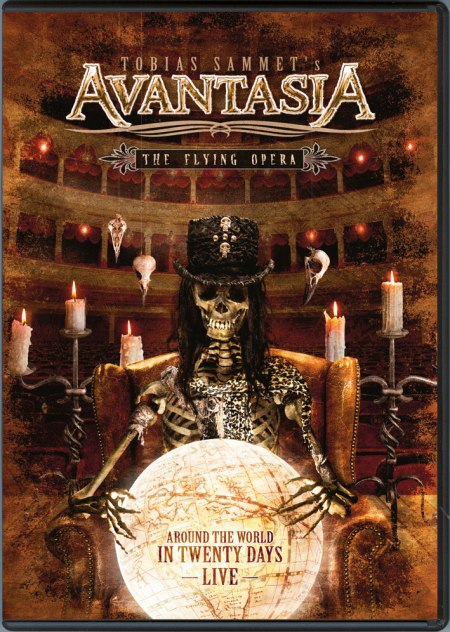 The new AVANTASIA four-disc box, "The Flying Opera - Around The World In 20 Days", has entered the official Austrian chart at position No. 1. In Germany, the double DVD that comes with the double CD has landed on the official album chart at No. 18.

According to a press release, the "The Flying Opera - Around The World In 20 Days" DVD is "a documentary of the legendary 2008 world tour of AVANTASIA, when the band hit the road for the first time to write a new chapter in metal history; traveling around the world with a giant all-star ensemble to bring the metal opera on stage and play on three continents within a few days, crossing the dateline and eventually playing to a total of 400,000 people within only a few weeks. The first DVD contains a live concert with a running time of almost two hours featuring footage filmed at the headlining shows of Wacken Open Air (Germany) and Masters Of Rock (Czech Republic). On the second DVD there [is] a movie, 'Around The World In 20 Days', that gives fans the opportunity to join AVANTASIA backstage and take a look at the surroundings and the thrill behind the scenes that go along with an extensive undertaking such as this. The DVD set portray[s] AVANTASIA 2008 when it all started."

"The Flying Circus - Around The World In 20 Days" is available as a two-disc DVD set featuring the documentary movie, a live concert film, and additional bonus material. It is also available as a double live album on CD and as a limited-edition two-CD/two-DVD box set.

Commented Tobias: "I am so proud of this DVD package and the featured footage, even though it took a little longer to finally complete it. It gives people an idea of what an impact the first appearance of AVANTASIA on stage had, and you will get an idea of how everything went beyond our expectations and what the roots and the seeds for the current AVANTASIA tour are. It portrays one year in AVANTASIA's history, maybe the most important year in the project's history because that is when a studio project became a traveling institution.

"There are many metal operas, but we made it something real, something to take hold of. Something alive..."