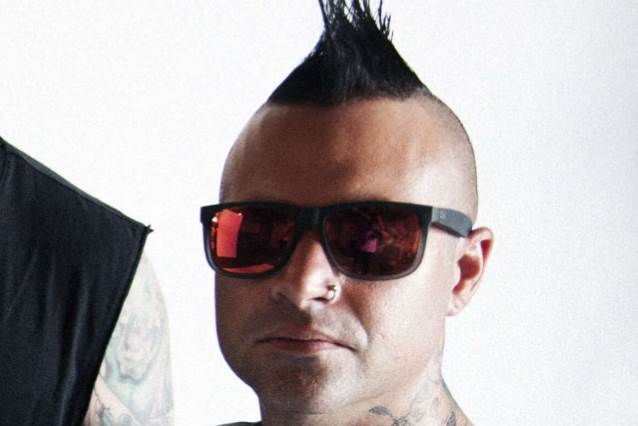 AVENGED SEVENFOLD bassist Johnny Christ was recently interviewed by Southeast Wreck Metal. The full conversation can be seen below. A few excerpts follow (as transcribed by BLABBERMOUTH.NET):

On how the group came to support METALLICA on the initial North American leg of the "WorldWired" tour:

Johnny: "Before we finished 'The Stage', we were opening an American football stadium in Minnesota, for the Minnesota Vikings, with METALLICA, and the bill did really well. It was us, METALLICA and VOLBEAT, and Lars [Ulrich] hit us up afterward through management, hit up [M. Shadows], and they were talking, going back and forth and talking about [how] it did so well and they had so much fun with the show, they wanted to take that show across the States and into Canada a little bit. Obviously, it took us about three seconds to say yes, because if you get one of the legendary bands like METALLICA, you don't really pass it up. We've learned so much just from being around those guys. They've taken us out in the past, and we learned so much from them that we wanted to go out there and do that tour with them. We had an absolute blast with them all summer long. It was a lot of fun."

On whether drummer Brooks Wackerman "fit in" immediately upon joining the band:

Johnny: "Yeah, obviously. As a drummer, he's such a great talent, and to be around that, that alone was enough, but he's also become part of the family at this point. He's a lifer. At this point, I think we're going to have to keep him around for a little while."

On his bass "heroes":

Johnny: "When I very first started, it was Cliff Burton, and then it quickly became guys like Les Claypool, Matt Freeman and Duff McKagan. To me, Duff just has a way of picking the right notes and the right runs that fit with everything, so [I'm] just a huge fan."

Johnny: "Years ago, they took us out.. we've played a couple of times. We had Slash out on stage with us in L.A. years ago to play 'It's So Easy', and then five years later, we had Duff out on stage in L.A. for an awards show to do the same. To play with your heroes is absolutely great, and even better on top of [it] to become friends with them and see how nice they are and everything... sometimes you're a little scared to meet your heroes, because they could end up being dicks, but that was thankfully not the case."

On staying "fit" while on tour:

On the band's tour rider:

Johnny: "We have a couple bottles of red wine, gin, vodka, scotch, some gum... the pretty standard stuff, I guess. I don't know what the other guys have, but we're still on a liquid diet most of the days."