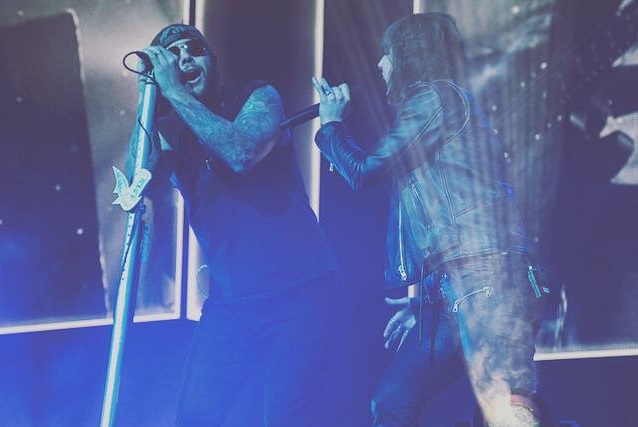 HALESTORM's Lzzy Hale joined AVENGED SEVENFOLD on stage last night (Friday, January 12) in Nashville, Tennessee to perform a cover version of PINK FLOYD's "Wish You Were Here". Fan-filmed video footage of her appearance can be seen below.

The concert at the Bridgestone Arena marked the opening show of AVENGED SEVENFOLD's North American tour with BREAKING BENJAMIN and BULLET FOR MY VALENTINE.

"Wish You Were Here" is one of several cover tracks featured on the deluxe edition of AVENGED SEVENFOLD's latest album, "The Stage", which came out last month.

"This is the song that started us down the rabbit hole with our recent cover recordings," said AVENGED SEVENFOLD frontman M. Shadows in a press release. "I've always loved this song, and though I felt it would be impossible to capture the somberness of the original, we approached it with another purpose. There's a poignancy to the song that seems appropriate with everything going on in the world today. We put a bit of a modern twist on it to reintroduce it at a time when it might help capture what some of us are feeling."

AVENGED SEVENFOLD's headlining tour was originally supposed to happen last summer but the band changed its plans after getting offered a support slot with METALLICA on the latter band's stadium run.

Thank you for a great night & a perfect kick off to the 2018 tour Nashville! A big thanks also goes out to our good friend Lzzy Hale from @Halestorm for joining us onstage for our cover of "Wish You Were Here" tonight! #avengedsevenfold#thestageworldtour 📷:@rafacorepic.twitter.com/58kioCRT1v