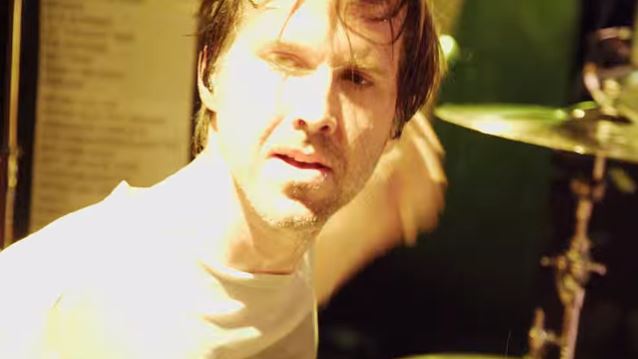 AVENGED SEVENFOLD has recruited Brooks Wackerman (BAD RELIGION, INFECTIOUS GROOVES) as its new drummer. As promised a couple of days ago, the news was revealed on this week's edition of the "Talk Is Jericho" podcast hosted by FOZZY singer Chris Jericho.

"To be honest, Brooks's name has always been in the mix," AVENGED SEVENFOLD frontman M. Shadows said. "It was one of the names we were throwing around when Jimmy [original AVENGED SEVENFOLD drummer James 'The Rev' Sullivan] passed away in terms of who was going to step up for [the 2010 album] 'Nightmare'. We felt Mike [Portnoy, ex-DREAM THEATER] was the right choice and we still feel that way. Mike just destroyed on the record. He was perfect. But at the time, our tour manager brought up Brooks's name as well. But at the time he was also busy with BAD RELIGION and it was also… People were going to look at it differently because he was a punk drummer at this point."

AVENGED SEVENFOLD had been working with a new drummer for over a year already following the departure of Arin Ilejay. Although Ilejay left the group quite some time ago, his departure was only announced this past July.

"It just became increasingly difficult to be on the same page, not only touring, but with writing and just where we want to take things," explained M. Shadows. "We're just a bunch of guys who are all over the place and we have a bunch of different influences and we need somebody who can instantly… who can sit there and say, 'Yeah, I've got that influence too or I understand why we're gonna go here. I understand why we're going to do that.'"

He continued: "It just got to the point where after Mayhem Festival last year, we had just decided to fire on all cylinders the way we want to, we needed to make a change. And we all had our little talk. We said, 'Listen, we can ride this thing out the way it is right now and we'll be fine or we can shake the nest a little bit and we want to fire on all cylinders again. We want to be the baddest band on the planet. We want to just dominate onstage.' And I came up with the idea that I really want to talk to Brooks and see if there's any chance and see where he's at in his life right now."

He went on to say: "Jimmy's missing and you're not trying to replace that and you're just trying to get to the point where if you were to tear this thing to the bottom floor, how would you rebuild it — to just say new band, new mentality, new fire. And one of the things was, 'Let's give Brooks a call and see what he's doing.' It wasn't like we were going to start trying guys out and we were serious about this change. It was, like, 'If Brooks is willing to do this, that's what we want to do.' So it wasn't like we were gonna just start looking for drummers."

Wackerman told the "Talk Is Jericho" podcast: "I've been a fan of the band for a decade and when Matt [M. Shadows] gave me the call last year, I was absolutely thrilled.

"This past year I have been reassessing what I want to do. With a band like BAD RELIGION, I'm so proud of all the work we've done together. But I was yearning for something new, a different style and during that time is when I got the call."

Wackerman announced his departure from BAD RELIGION on October 28, explaining in a statement that "it was time" for him "to pursue another path."

Wackerman joined BAD RELIGION in 2001 and made his studio debut with the band on 2002's "The Process Of Belief" album.