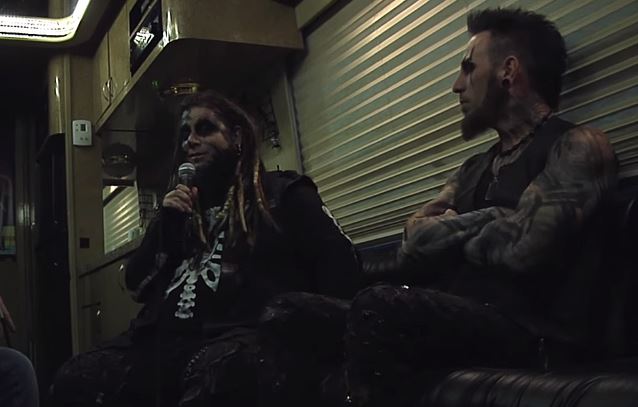 IN THIS MOMENT Plots 2016 Studio Return For New Album

Mike Karolyi of iRockRadio.com conducted an interview with guitarist Chris Howorth and bassist Travis Johnson of IN THIS MOMENT before the band's October 8 show at Mohegan Sun Arena in Uncasville, Connecticut. You can now watch the chat below. A couple of excerpts follow (transcribed by BLABBERMOUTH.NET).

"We are right now working on our plan. We have a European tour that's already happening in January, to start everything off, and then we're looking to do some more stuff in the States. And the wheels are starting to crank on new music that's gonna be happening; we all kind of know it, we're feeling it. So I personally am predicting we're gonna be hitting the studio sometime later in 2016 to hopefully have something out before the end of the year or the beginning of 2017. So touring half the year, writing and recording latter half the year. It's kind of my loose prediction."

On continuing to put out studio albums:

"You've gotta do it, man. All the bands out there. These days, unless you're METALLICA, you can't wait five-six years between albums; you have to keep product out there, 'cause people will hear it and you'll do the tours, they'll see it live. And the only way to generate more buzz and get that hype going and get that fuel jetting and all the press and people like you wanting to talk to us, we need new topics and new stuff, man, and that's why we've gotta keep pumping it out."

On IN THIS MOMENT's tenth anniversary as a band:

"It's kind of hard to believe, but it's also like you're living it, and it never ends. You always think like you're gonna get this thing to happen, and then, 'We did it. We made it. We're here at the top of the mountain. Everything's great.' You think, 'Okay, I'm gonna sign a record deal. There it is. I put out an album. There it is. I go on tour. There it is.' But there's always some other plateau, so it seems like we're just constantly working to be this giant band and make it larger than life and be something that can last us for our whole lives, our career. And that's kind of been the main focus. So it's almost like ten years… It seems fast, but then I look at pictures of us from 2007, and it's, like, 'Oh my God! Look at these guys. They're like little kids and stuff.' Even him [pointing at Travis], I feel like he just joined the band, but he's been in the band for almost six years. And the other guys that are newer, they are like the 'new guys,' but they've been in the band for four years now — almost two album cycles. So it's just crazy, man. Time flies."

IN THIS MOMENT signed with Atlantic Records in 2013 after completing its contract with Century Media Records.