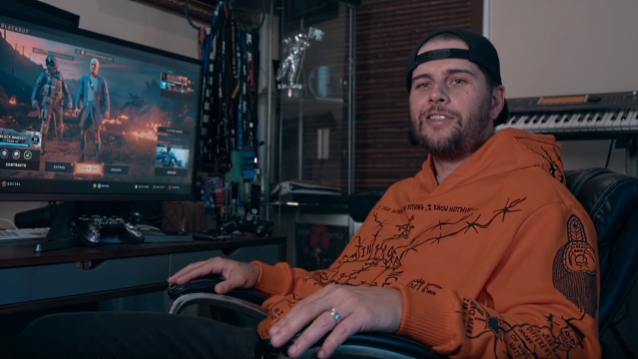 AVENGED SEVENFOLD Singer Says He Totally Gets A Kick Out Of Being Playable Character In 'Call Of Duty: Black Ops'

"I wasn't sure if they were gonna use the model from 'Black Ops 2', but I was hoping they were gonna upgrade and do a new model," Shadows continued. "There have been some changes. I look a little different. I feel like the technology has gotten better, so I was excited when I learned I was gonna go down and redo the motion capture. They did the body scans, took pictures of all my tattoos [and] really got it down. And then I went back. I did voiceovers, so I had to write a bunch of my lines. My buddy helped me with my lines. So we were thinking of funny things that we would hear on the battlefield that we wanted to have said in the game. 90 percent of the things we came up with were in no way gonna make the game — they were entirely inappropriate — but we got some good ones in. I got to go in there and try to be an actor — a voice actor.

"I don't really see singing in the studio as acting. This was definitely acting. I was trying to put myself in the position of being dropped in with a hundred people and having to fight for my life. So I was able to capture my own personality within the character. And it's been a total trip."

"Operation Apocalypse Z" is currently available for the PlayStation 4 and will come to other platforms later.

"Mad Hatter" was the first original material AVENGED SEVENFOLD has released since 2017's "Dose", which originally surfaced in the Gameloft mobile game "Dungeon Hunter 5". It later appeared on the "deluxe edition" 2017 reissue of the group's 2016 studio album "The Stage".

AVENGED SEVENFOLD has kept a low profile so far during 2019 and will not return to the road until next year. A blood blister on singer M. Shadows's vocal cords forced the band to cancel a summer 2018 tour with PROPHETS OF RAGE and THREE DAYS GRACE.