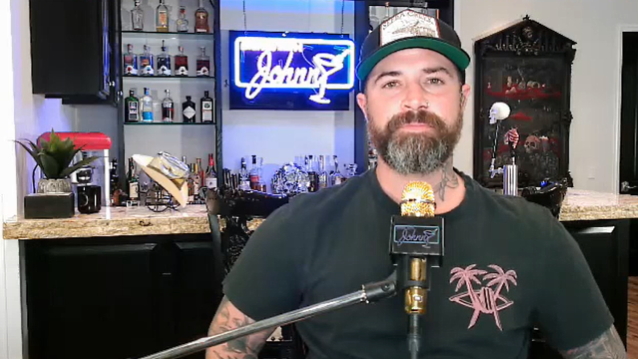 AVENGED SEVENFOLD's JOHNNY CHRIST On Dealing With Pandemic Quarantine: 'It Wasn't That Hard For Me To Cope'

During a recent appearance on "Vox&Hops", the podcast hosted by Matt McGachy, frontman of extreme metal band CRYPTOPSY, AVENGED SEVENFOLD bassist Johnny Christ spoke about how he has been dealing with the coronavirus pandemic. He said (as transcribed by BLABBERMOUTH.NET): "I guess just doing my podcast ['Drinks With Johnny'] kind of helped me. I'm kind of a big extrovert, so it was kind of tough for me to not be able to go out and do all the things that I wanted to do. But through these Zoom chats, luckily enough, we were able to have technology out there. I mean, it's been around for a couple of years, but no one really knew about it. But now that we're using it, it's been great being able to still stay connected to new people and old friends and things of that nature. So, that's helped me through. And then, luckily, I have a young son and a wife, and I wasn't just stuck in a house by myself. A lot of people had it a lot worse. I've got a decent-sized house and places where we can go to different rooms and stuff and get creative. Early on, it was a lot of getting blue tape out and setting up obstacle courses for my son around the house and stuff, going in the pool and things like that. So I can't complain too much, man. It wasn't that hard for me to cope. The main thing was not being able to get out around people."

Earlier this month, AVENGED SEVENFOLD's 2010 album, "Nightmare", and its 2013 follow-up, "Hail To The King", were officially certified platinum by the RIAA (Recording Industry Association of America) for sales in excess of one million copies.

This past March, AVENGED SEVENFOLD's sophomore album, 2003's "Waking The Fallen", was certified platinum by the RIAA. On the same day, the LP's lead single "Unholy Confessions" was certified gold for accumulating 500,000 certified units.

The only other AVENGED SEVENFOLD album to achieve platinum status in the U.S. is the band's third LP, 2005's "City Of Evil".

In February, AVENGED SEVENFOLD singer M. Shadows told the Minneapolis, Minnesota radio station 93X that "70 percent" of the follow-up to 2016's "The Stage" album was "done." He said: "We're working on stuff. We have some things we can't finish right now 'cause of COVID — string players, et cetera. We know Andy [Wallace, AVENGED SEVENFOLD's longtime mixer] doesn't wanna travel, or his management doesn't want him to travel because of COVID. So there's just a lot of things going on."

As for when fans can expect to see the new AVENGED SEVENFOLD LP released, M. Shadows said: "It doesn't make sense for us right now to put out a record and not be able to tour it. The world has changed. Putting out a record on Spotify without touring for a rock band, it just doesn't make sense to us. So we're gonna wait till everything is back, then we'll come out with the record, finish it up, and all will be good."

Last December, M. Shadows told Kerrang! magazine about the musical direction of the new AVENGED material: "The [new] record sounds nothing like 'The Stage' — it's a completely new direction, and it sounds nothing like anything we've done. That's all I'll say about it: it's over the top, and it's very eclectic and wild."

AVENGED SEVENFOLD kept a low profile during 2019 and will likely not return to the road until the end of this year or early 2022. A blood blister on M. Shadows's vocal cords forced the band to cancel a summer 2018 tour with PROPHETS OF RAGE and THREE DAYS GRACE.

Asked if he is fully healed up now, M. Shadows told 93X: "I feel good, man. I'm just working on a new technique so that I can make sure I don't have any problems anymore. For the last year, that's what I've been doing — is switching up a lot of things, singing from a different place, and just making sure that when I hit the stage again, I don't resort back to old bad habits."