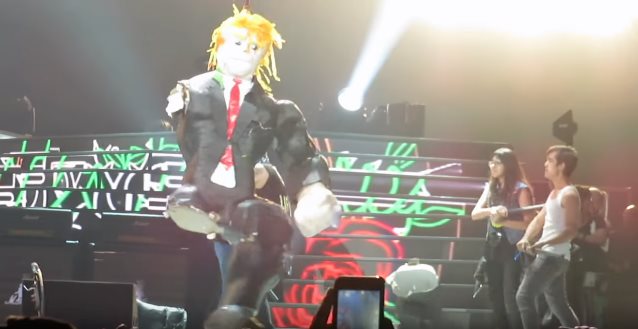 "Let's bring up some people, and give them a fucking stick," Axl told the crowd. "I just want you to express yourself, however you feel."

A fan then came up and started hitting the piñata, causing Axl to react: "He's got it. Go ahead!"

Trump drew outrage during his campaign for his tough talk about America's southern neighbor, calling some Mexican migrants "rapists" and robbers and promising to build a border wall paid for by Mexico to stem illegal entries.

Axl recently took to Twitter to condemn Trump's choice for U.S. attorney general, Alabama senator Jeff Sessions, and to berate Trump for demanding an apology from the cast of the Broadway show "Hamilton" after vice president-elect Mike Pence was booed when he attended the musical

Sessions, who has been a key adviser to the Trump campaign, is known for his hardline stance against both legal and unauthorized immigration. He has seen as a controversial choice to head a department charged with protecting voting rights and running immigration courts.

Sessions was nominated by President Ronald Reagan as a federal judge in 1986, but the Senate rejected his bid after colleagues testified about racially offensive comments Sessions made as a U.S. attorney in Alabama.

As for the "Hamilton" incident, Pence was booed by the audience at the show several times last month. At the end of the evening, cast member Brandon Dixon read a respectful if pointed statement directed at Pence, saying: "We hope this show has inspired you to uphold our American values, and work on behalf of all of us."

Trump took to Twitter to demand that the cast "apologize" for having "harassed" Pence. Rose wrote: "Do u ever stop whining? An apology? Seriously?! U won, this is the job, get on with it or get out of the kitchen."

Pence himself indicated on "Fox News Sunday" that he thought "Hamilton" was "incredible," and "wasn't offended" by either the boos or the cast statement.

Rose has acknowledged not voting in the past in a 2012 interview with Jimmy Kimmel, although he revealed that he leads Democratic. It is not known whether he voted in this year's contest between Trump and Hillary Clinton.