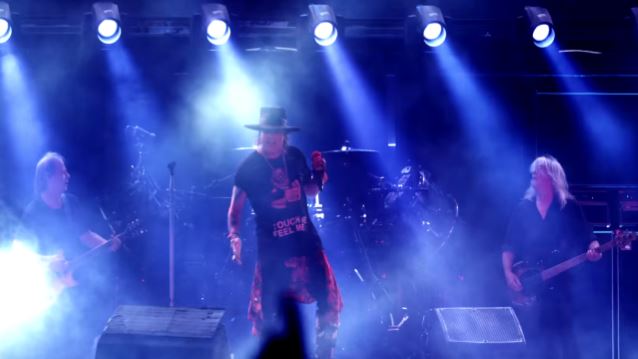 AXL ROSE: 'Everybody Has An AC/DC Story'

A video recap of AC/DC's recent European tour with GUNS N' ROSES singer Axl Rose can be seen below.

Rose says in the clip: "Everybody has an AC/DC story. Every person knows some time in their life, there was an AC/DC song that they did something with; they have a memory attached to it."

Adds AC/DC guitarist Angus Young: "With Axl, we've been able to mix up quite a few songs with the older ones, and the fun part is, when we get there on the stage, seeing it come to life in front of the audience."

Among the rarities the band broke out on the European run were "Riff Raff", "Rock 'N' Roll Damnation", the aforementioned "Touch Too Much" and "If You Want Blood (You've Got It)".

The legendary Australian hard rock outfit recruited Rose for more than twenty shows after singer Brian Johnson had to abruptly come off the road or face total hearing loss.

Young said recently that he's not sure what AC/DC will do after wrapping up its current tour, remarking, "We were committed to finishing this tour, so that's been our main goal, and Axl's helping us. I know he's very excited. He keeps saying, can he do more? But we don't really know at the end how we will [proceed]."

AC/DC bassist Cliff Williams recently revealed that he will retire from recording and touring after finishing out the band's current world trek. Williams's decision follows a string of personnel changes for the group that started with co-founding guitarist Malcolm Young's departure in 2014 after he was diagnosed with dementia. Last year, drummer Phil Rudd was sentenced to house arrest after he was found guilty on a drug charge.

Assuming neither Rudd nor Johnson return, Williams's exit means that only Angus Young remains from the lineups that recorded classic albums like 1979's "Highway To Hell", 1980's "Back In Black" and 1981's "For Those About To Rock...We Salute You".

The rescheduled dates of AC/DC's North American tour — which will be the band's first concerts here with Rose on lead vocals — will kick off in Greensboro, North Carolina on August 27.