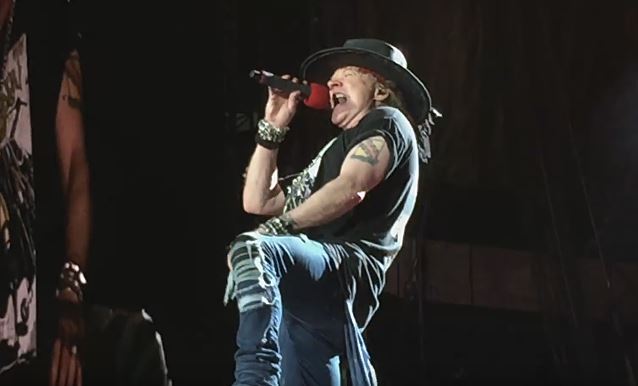 According to Alternative Nation, GUNS N' ROSES and AC/DC frontman Axl Rose reached out to a young waitress who was victimized by a racist customer. 18-year old Sadie Elledgemade headlines recently when she was left a note on a customer's receipt that said "We only tip citizens" while working at Jess' Quick Lunch in Harrisonburg, Virginia. Elledge was born in America, and is of Honduran and Mexican descent.

The Pulse Of Radio reports that "Jane The Virgin" star Greice Santo got wind of the story and decided to reach out to Elledge, treating her to a makeover — after which Sadie got a phone call from Santo's friend Axl Rose, who invited her to a AC/DC concert.

Santo said: "Axl is a friend and I told him about Sadie and he already knew her story... He actually wanted to fly in personally and invite her to the Fort Lauderdale show on August 30th and have her and her family flown down to show in Fort Lauderdale and put up in beautiful hotel rooms there as well on his dime."

Elledge and her family were unable to attend on August 30, but it was arranged for them to attend a show on September 17 in Washington D.C. Santo said: "Axl is one of the kindest and most generous men I've ever met and he is such a cool but down-to-earth regular guy. He really wanted to make this so special for Sadie."

Rose called Santo and Elledge during the latter's makeover and personally told Elledge the news, saying: "I didn't like this story (of what happened to you). I wanted to be a part of Greice's plan and invite you to our AC/DC show in Washington, D.C."

Elledge has reportedly been overwhelmed by the support she's gotten from people around the world, including Santo and Rose.