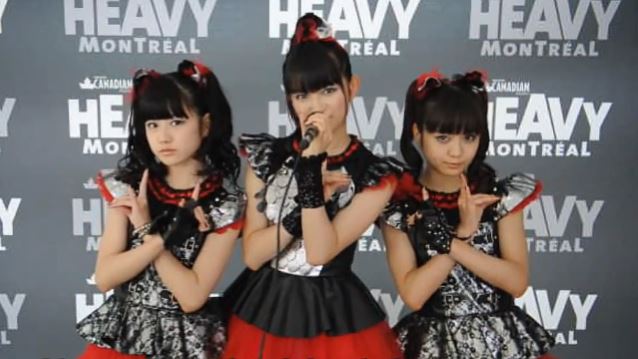 BABYMETAL Interviewed On 'Do You Know Jack?' Radio Show (Audio)

TJ Buggins of CJIM and the "Do You Know Jack?" radio show conducted an interview with BABYMETAL on August 9 at the Heavy Montreal festival in Montreal, Quebec, Canada. You can now listen to the chat using the Mixcloud widget below.

BABYMETAL's debut album, which came out in February, received 4.5 stars out of 5 from the Japanese edition of Rolling Stone.

"The reaction was so different than in Japan," Nakamoto told MTV about BABYMETAL's first European concerts. "At first I was nervous, because I wasn't sure whether anyone would turn up. And yet, some fans came in cosplay or knew all the dance moves. Some of our lyrics use quite difficult Japanese words, but I think the crowd in England sang along even more than our fans at home.

"I think our strongest suit is our live show," she adds. "I hope people can come along to see us perform and be like, 'What the hell is this?'

"I think the reason people like us is because we make 'kawaii metal,' and no one else does that," she continues. "The three of us started out with no personal interest in metal; we all just thought the music seemed like fun. And that means that even people who aren't usually interested in metal might be interested in our music in a similar way.

"A lot of people also get into us from copying the choreography from our videos on YouTube. Seeing so many comments on our YouTube channel from people all over the world, even if they don't understand Japanese, made me realize that music has worldwide appeal."