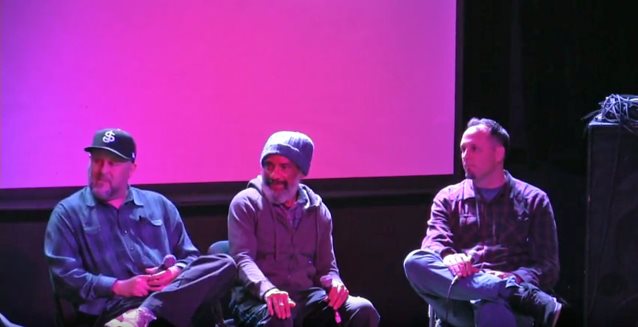 On January 24, Paul "HR" Hudson of punk/hardcore pioneers BAD BRAINS, along with author Howie Abrams and filmmaker James Lathos took part in a BackStory Events live interview at Saint Vitus in Brooklyn, New York. You can now watch video footage of the event below.

Hudson is a misunderstood spiritual warrior. As the voice of BAD BRAINS, one of the most influential bands to rise out of the 1980s, and Rock And Roll Hall Of Fame nominees, HR has trail blazed a musical aesthetic and codified a way of living. "Finding Joseph I", directed by Lathos and produced by Small Axe Films with executive producer Jay Mohr, takes the viewer on a harrowing odyssey into the life and spiritual struggles of this iconic iconoclast.

"Finding Joseph I" has been praised by the New Yorker, Rolling Stone, OC Weekly and the Washington Post. The documentary has been screened in New York, Maryland, Long Beach, California, England and Finland, with upcoming screenings in San Francisco on February 9 and February 11, at SF's Independent Film Festival; at the Long Beach, California Art Theater on February 12; and Missoula, Montana, at the Big Sky Film Festival. Currently, "Finding Joseph I" is also being considered for other national and international film festivals.

From the start, HR oozed charisma and never-say-die swagger. His vocals were soulful and tribal, hitting us deep in our spiritual core. In performance, he gave it all, springing forth from stage monitors into swan-dive leaps into the audience, arguably, pioneering the stage dive. He frothed over with fiery enlightenment gleaned from his Rastafarian faith, Napoleon Hill's seminal self-help treatise Think And Grow Rich, punk rock, and his inborn sage wisdom. With the BAD BRAINS, he harnessed the fiery potential of melding punk rock, reggae, dub, jazz-fusion, metal, and funk into a kaleidoscopic art form. HR's uplifting ethos — P.MA. (Positive Mental Attitude) — have cast a light amidst dark defiance, and inspired everyone, from rock stars to regular Joes. He is a punk prophet, and his legacy is as resonate today as it was nearly four decades ago.

Offstage, HR was mercurial and eccentric. "Finding Joseph I" presents a complex picture of a complex man. It shares his explosive artistry as well as his explosive temper, showing how a leader unraveled through being tangled in his own dogma and truth. Over the years, the BAD BRAINS have reunited several times only to struggle with their unpredictable singer. HR's increasingly strange and abnormal behavior has left many convinced that he his suffering from psychological troubles while others believe he is still living out his journey as one of the greatest frontmen in rock and roll history.

Lathos is a director, cinematographer, editor, and published writer living in Florida. He makes his documentary debut with "Finding Joseph I: The HR From Bad Brains Documentary". Previously, he wrote the definitive tome "Finding Joseph I: An Oral History Of H.R." (Lesser Gods). This oral history, which was co-authored by Abrams, is the first fully authorized biography of the enigmatic frontman. 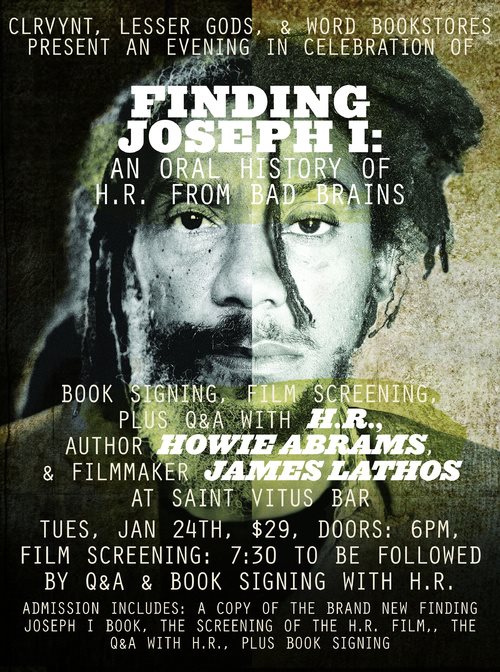