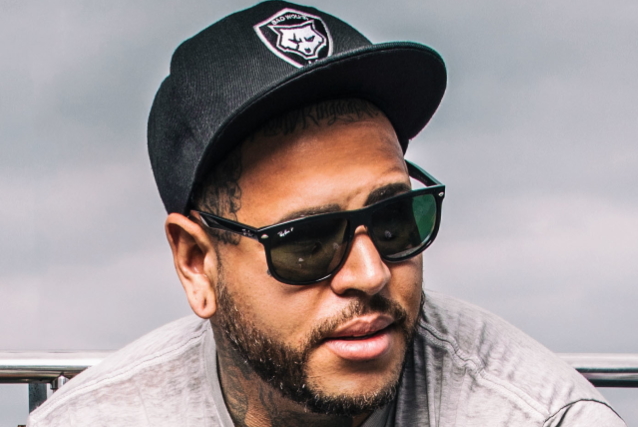 BAD WOLVES frontman Tommy Vext has shared his views on the current state of the "Black Lives Matter" movement and what he believes is actually happening behind the scenes, along with his thoughts on racism and whether it exists.

In a six-plus-minute video posted on Instagram, Vext suggests that "Black Lives Matter" was created by people like George Soros, the Holocaust survivor and billionaire who is the subject of many right-wing conspiracy theories, along with the Clinton Foundation. He maintains that they invest in "Black Lives Matter" to profit from media coverage.

"You have Antifa who is paid for by George Soros," Vext says in the clip, referring to loosely affiliated, left-leaning anti-racist groups that have been involved in some violent clashes in recent years. The movement has no unified structure or national leadership. "These are highly trained, professional rioters and escalators. So they move in and disperse throughout all the different riots, right? And then the Clinton Foundation pumps money into promoting this stuff on social media."

He continues: "The same people who instigate the event, organize the protest and escalate the protest make money off the African-American community's outrage and further deplete the morality of the United States."

Vext also asserts that racism in the United States is "manufactured."

"We have turned into this — citizens policing other citizens over a veil of racism that doesn't exist," Vext says. "I'm African American … I've grown up in this country and I have not experienced actual racism. I've spent 20 years traveling through 48 states and … 50 countries all over the world. We don't have a problem with race here. It's all manufactured."

Vext said he made the video "after weeks of research & interviews with independent journalist(s),military personnel, entertainment industry professionals, a virologist & many ex Democrats." He added in a written message accompanying the clip, "I beg everyone who watches this to do there (sic) own research and come to their own conclusions on this issue. I could very well be wrong."

BAD WOLVES is currently sitting at No. 2 on the rock radio chart with "Sober", from the band's second album, "N.A.T.I.O.N.", which arrived last October.

After weeks of research & interviews with independent journalist, military personnel, entertainment industry professionals, a virologist & many ex Democrats I think I have some understanding of what is going on here. PLEASE REMEMBER THIS IS HOW I HAVE PROCESSED ALL THE INFORMATION I HAVE FOUND/ BEEN GIVEN. I BEG EVERYONE WHO WATCHES THIS TO DO THERE OWN RESEARCH AND COME TO THEIR OWN CONCLUSIONS ON THIS ISSUE. I COULD VERY WELL BE WRONG. REMEMBER I AM JUST A ROCKSTAR & NOT A POLITICIAN NOR DO I HAVE A DEGREE IN POLITICAL SCIENCE. IM SIMPLY JUST ANOTHER AFRICAN AMERICAN CITIZEN CALLING BULLSHIT ON VOLUNTARY SLAVERY. SO PLEASE CORRECT ME IF I AM WITH DOCUMENTATION & DM ME @davidjharrisjr @ibnicolearbour @the_typical_liberal @deviantgentlemen @realcandaceowens @stevekuclo @dc_draino