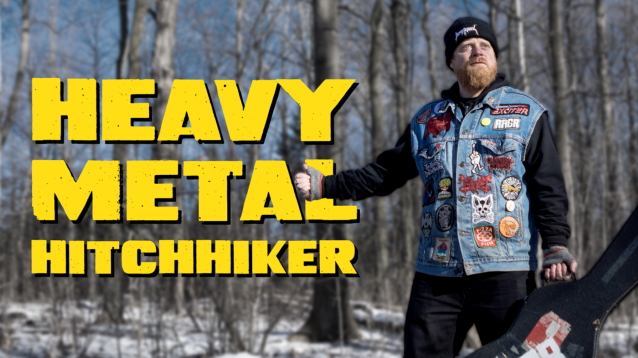 The series is directed and co-written by Marc Ricciardelli ("Shredders Of Metal", "Protest The Hero: Of Our Own Volition") and stars comedian Garrett Jamieson and is soundtracked by music from POWER TRIP, CARCASS, MUNICIPAL WASTE, EARTHLESS and POSSESSED, as well as a slew of Canadian artists such as EXCITER, KEN MODE, PROTEST THE HERO, CANCER BATS, MOUNT CYANIDE, SARIN and SMOULDER.

This action-packed comedy series follows a day in the life of Mitch, a heavy metal-loving gas station attendant, who stumbles upon an abandoned guitar that belongs to his favourite band, RÄGR. In a moment of happenstance, Mitch realizes that he must follow in his father's roadie-shaped footsteps and return the six-stringed axe to the band in time for their headlining concert. Without money or wheels, Mitch's only option is to hitchhike. He's got 10 hours to travel 247 kilometers to fulfill his destiny.

The series' executive producer is Sam Dunn, co-founder of Banger Films, an award-winning filmmaker and a global ambassador for the heavy metal community.

"This is a new chapter for BangerTV. Metalheads are going to be blown away by this series," explained Dunn. "It's jam packed with laughs and killer tunes from some amazing bands. I'm super proud of this series. It isn't just for metalheads, I think everyone will enjoy it."

"The Heavy Metal Hitchhiker" digital series is produced by Banger Films with the support of the Bell Fund.

Banger Films is a fully integrated production company creating feature documentaries, TV series, live concerts, kids programming and digital. Founded by Scot McFadyen and Dunn in 2004 with the groundbreaking documentary "Metal: A Headbanger's Journey", its signature productions include the Peabody Award and International Emmy Award-winning series "Hip-Hop Evolution", the Grammy-nominated doc "Rush: Beyond The Lighted Stage" and "Metal Evolution", the biggest television series ever made about the history of heavy metal.

BangerTV is the world's fastest-growing digital channel for heavy metal music and culture. With over 40 million channel views, it's where headbangers gather to watch the best original documentaries, interviews and reviews made by metal fans, for metal fans. Since launching in September 2015 as a YouTube channel, it has reached more than 310,000 subscribers and has become the go-to destination for the international metal community.