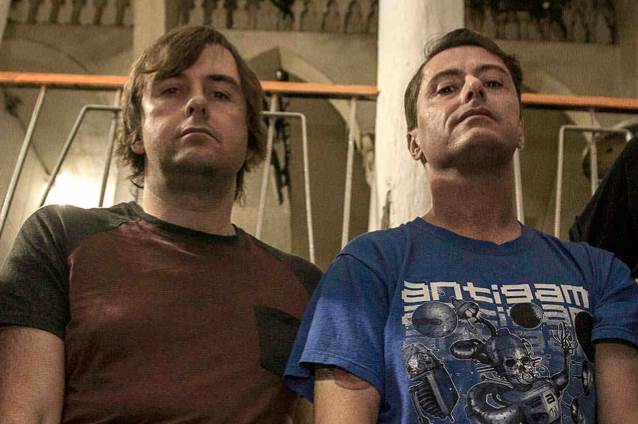 At this weekend's edition of the U.K.'s Download festival, NAPALM DEATH frontman Mark "Barney" Grenway spoke to Metal Wani about the progress of the writing and recording sessions for the follow-up to the band's 2015 album "Apex Predator - Easy Meat". "The music is recorded to a point, and I'm working on the vocals at the moment and the lyrics and stuff," he said (hear audio below). "Realistically, it'll be [released] next year, I think."

Greenway also confirmed that guitarist Mitch Harris, who has been taking a leave of absence from NAPALM DEATH since late 2014 to focus on his family life, will be involved with the group's next record. "Mitch has played guitar on the album so far," Barney said. "I don't know what Mitch is gonna do outside of recording, to be honest with you. But I can officially say he has played on the album."

Asked about SLAYER's decision to call it quits after completing one final world tour, Greenway said: "You know what, mate? I have no opinion on it, 'cause I think every band's gotta make their own decisions as [far as] that goes. If one day I was feeling, or any of the guys in the band were feeling that the enthusiasm wasn't there to make fresh albums, the enthusiasm wasn't there to play live, then I don't wanna do it anymore. I don't wanna do a 50-percent version of NAPALM DEATH; it has to be a hundred percent. So, whatever those SLAYER guys have decided will no doubt have been after a lot of consideration. So I wouldn't begin to pass judgment on what other bands are doing. So I feel neutral; I don't feel either way. I'm not like that — I don't try to second-guess… I don't really care. They are the ones that have got to come to a decision."

Barney went on to say that SLAYER has been an influence on NAPALM DEATH's music in the past. "Certainly the early albums, to a point," he said. "Not so much as maybe other bands, because we were equally influenced by fast hardcore and punk. Metal is only a certain part of NAPALM DEATH. We get tagged as a metal band very often; that's quite lazy. And I don't mean that in a derogatory way towards people who say that. It's just an easy thing to fall into. NAPALM's a lot more than that, to me."

Earlier in the year, NAPALM DEATH bassist Shane Embury told Christina Rowatt of Australia's The Void about the band's new material: "It's fast, but there's also a lot of some, I don't want to say 'experimental,' but hopefully once it's done it will go in a few different directions. I don't want to say noise, but there will be some stuff like that, a couple of mid-paced, kind of KILLING JOKE-influenced [songs]. Hopefully we'll veer off in a few directions and it will make the album… it will still be abrasive, but not constantly fast all the time. There is some extremely fast stuff, but we've all been kind of like ticking away at every album, trying a little bit of that and little bit of that, so each step, this one will be the most diverse yet, I hope."

NAPALM DEATH will support SLAYER on the second U.S. leg of the latter band's final world tour. The 20-date trek, which will kick off on July 26, will feature additional support from LAMB OF GOD, ANTHRAX and TESTAMENT.