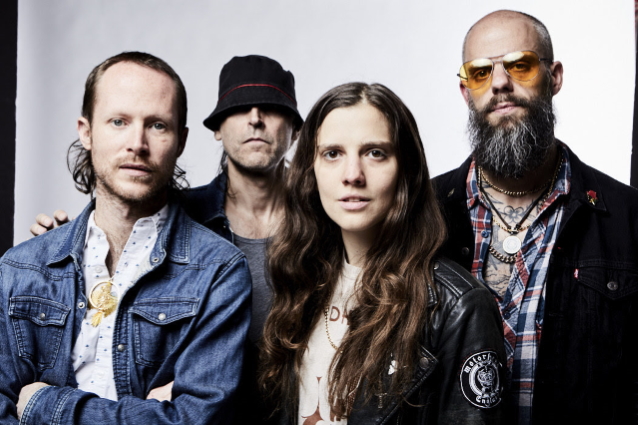 BARONESS will return to the road this fall, bringing its uplifting, dynamic and much needed version of heavy music to smaller stages from coast to coast. As part of the celebratory nature of the special five-week trek, the band is giving fans the power to create the setlist. "Your Baroness - An Intimate Evening With Baroness" ticket buyers will be provided with a link to cast their vote for the ten songs they want to hear at the show. BARONESS's entire catalog will be fair game with no song off limits. Voting will close one week prior to each performance.

"I cannot remember any moment in the history of this band where we've been more excited to tour than we are today," explains BARONESS vocalist/guitarist John Baizley. "In many ways, this upcoming tour feels similar the very first BARONESS tour in 2003: we don't know what to expect, we're through sitting on the sidelines, and we can't wait to climb onstage.

"During the past two years, we've tried to keep ourselves as busy as possible: writing, recording and rehearsing insofar as the pandemic would allow. Throughout that time, one fact has become increasingly clear… we are built as a live/touring band. The most powerful and important aspects of music reveal themselves only through shared experience.

"BARONESS's music is designed to be shared; our audience has always been the final and most important member of the band. Quite simply, it doesn't feel right without YOU! We've started counting down the hours in anticipation of that first blissful moment when the lights dim and the room falls silent, when we can once again commune with our audience. We've missed you all dearly and we're really excited to see the setlists you all design for us. There's never been a better time to put the trust and control of our music in your capable hands. Electric or acoustic, sung or screamed, from the EPs to the LPs: we're busy preparing for everything from those six or seven hours of recorded music. Furthermore, we thought the pandemic had stolen from us the opportunity to play 'Gold & Grey' in front of American audiences and we look forward to playing those songs for you as well. Finally, we're really thrilled to have the opportunity to play up close and personal in some venues we haven't typically played in recent years. It feels so good to share all of this news with you, we've missed this more than we can possibly explain. We hope to see you all soon!"

In addition to picking the band's setlist, every attendee will also receive a free, limited-edition "Your Baroness" tour poster print, to be picked up at the merch booth the night of the show.

"Your Baroness - An Intimate Evening With Baroness" dates:

Tickets are on sale this Friday, October 1 at 10 a.m. local time. COVID-19 protocols will vary by venue and municipality but all attendees will be required to show proof of vaccination or have the option to provide a negative PCR test within 24 hours of the event (where allowed). All concertgoers will be required to wear masks.

BARONESS was days away from launching its Australian tour in support of "Gold & Grey" when the lockdowns began. The foursome had recently completed an extensive European tour and were looking to spend the spring of 2020 on the road with AGAINST ME! as part of a co-headlining trek that traversed North America. Weeks later, and in the midst of the most restrictive part of the pandemic, the band released one of the first-of-its-kind composite videos, dubbed "Tourniquet (Socially Distant)", the stirring song took on new meaning as the band members, dripping with emotional intensity, performed in isolation. 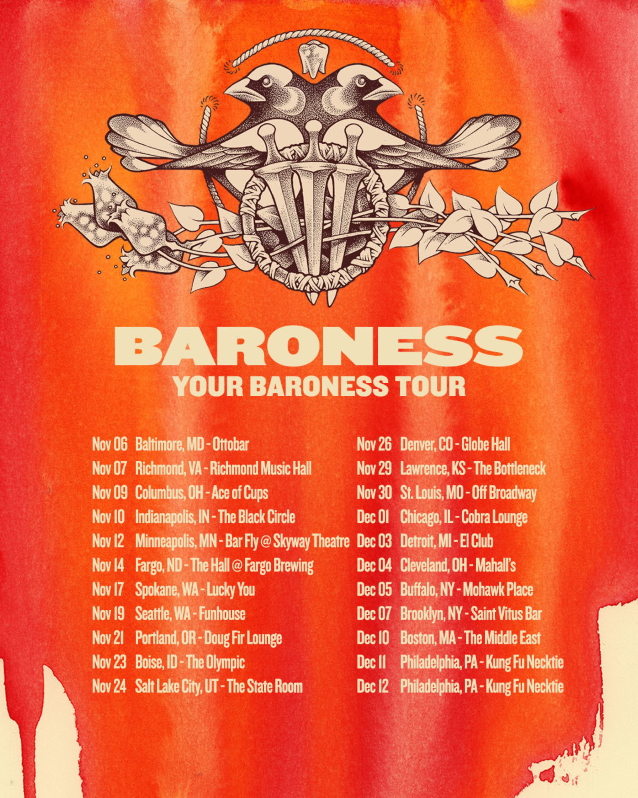