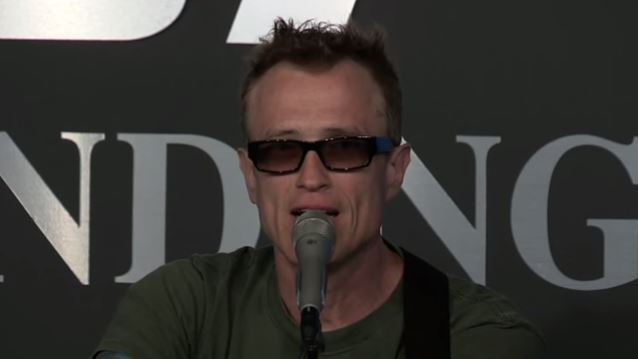 Says McLernon in a statement: "I'm leaving my post on stage right. It's been a humbling honor to see you all, and I can't ever express sufficient gratitude for your undying dedication and your love for what we've done. Take care of yourselves, travel safe, and maybe I'll see you down the road."

According to SAIGON KICK, there were "no hard feelings or even musical differences" that caused Varone to exit the band. The remaining members of the group blamed the split on "just life moving on" and announced the addition of Jonathan Mover (Joe Satriani, Alice Cooper, Aretha Franklin, Mick Jagger, Peter Frampton) to the group's lineup for their upcoming shows in Boca Raton, Orlando and the Cathouse Live At Irvine Meadows festival in Irvine, California.

SAIGON KICK is perhaps best remembered for its second album, 1992's "The Lizard", which spawned the band's biggest hit single, "Love Is On The Way". The track reached No. 12 on the Billboard Hot 100 and its accompanying video was in the top 10 MTV countdown for many weeks. Just before touring for the LP commenced, bassist Tom DeFile was fired and was replaced by ex-COLD SWEAT bassist Chris McLernon. They toured from summer 1992 to spring 1993 and "The Lizard" was eventually certified gold by the RIAA (Recording Industry Association Of America) for sales in excess of 500,000 copies.

In a 2014 interview with Songfacts, SAIGON KICK guitarist Jason Bieler was asked what whether he thinks that a new studio album is going to be released at some point. "We're talking, we're taking our time, we're not doing a lot," he said. "I'm sure at some point we'll get to music, but we're trying to walk the line we didn't walk correctly before. We want to make sure we don't go that road — and I won't name names — but these sad, horrid bands from way before that are playing every pig-in-a-poke barbecue festival for any amount of money and just living in the glory of before. Not that we think we're going to be this new reborn cool thing, but we just want to stay a lot more true to who we are musically and a little bit more protective of what we weren't protective of before, and show the things about us that we didn't really pay attention to. So that's kind of where our head's at, both musically and even performance-wise. That's why we're not doing 300 dates and that's why we're not supporting every band or doing a headline here. Heck, we've done nine or ten shows in coming on two years. So we're just really taking it easy and finding the right opportunities that make sense for us."