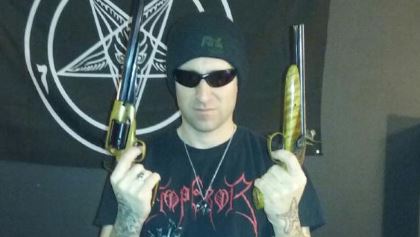 According to the Sandusky Register, the bassist of the Ohio black metal band SATANICON (Facebook page) is suspected of killing his girlfriend before shooting himself early Sunday morning.

Raphael Greaves, 36, and Angela Tierney, 31, were both dead when police got to the scene.

Tierney called 911 just after midnight on Sunday. In the recording of the 911 call, she can be heard telling Greaves, "I'm sick of this [expletive]. This is ridiculous. I was sitting there not doing anything. I didn't do anything!"

She then came on the line to speak to the dispatcher, saying, "Hello, my boyfriend just [expletive] threw me up against the wall by my (inaudible). He's coming at me right now." She added: "I didn't do anything. Drunk and goes ballistic, as always. Every [expletive] weekend I have to deal with this." The recording then captured screaming before the phone went dead.

"Initially the call was a physical domestic taking place and unfortunately when officers found a female deceased and a male that was deceased also," Sandusky Lieutenant Scott Dahlgren told Fox8.com.

Greaves, who worked as a truck driver, was open about his Satanism, having posted photos of a dark room adorned by a poster displaying the symbol of Lucifer as well as of his new tattoos of the symbols of Lucifer and the Necronomicon, a black magic textbook featured in the works of horror writer H.P. Lovecraft.

"I think it was the alcohol that drove him to do it, and not Satanism," Greaves's SATANICON bandmate Joe Aufricht told Sandusky Register.

"I'm still trying to process it," Aufricht added. "I knew Ray was a little funny when he drank. I never imagined he would do anything like that."

Tierney is reportedly survived by a 9-year-old son.

I carry a knife on me at all times just in case anyone tries anything with me. HAIL SATAN!!!!

Check out a couple of my toys. Both are old 44 calibers