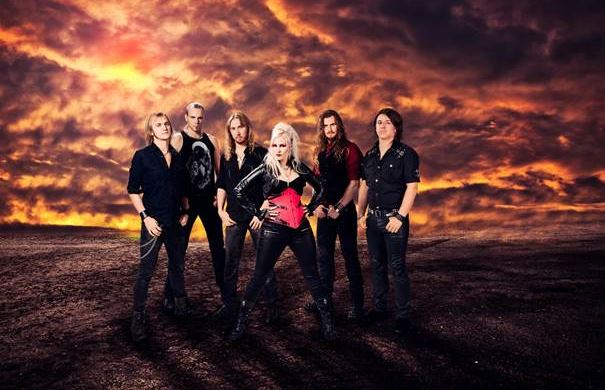 The first trailer for "Unholy Savior", the third studio album from Finnish female-fronted metallers BATTLE BEAST, can be seen below. The CD will be released on January 9, 2015 in Europe and January 13, 2015 in the U.S. via Nuclear Blast.

The "Madness" video can be seen below. The clip was directed by Ville Lipiäinen, who has previously worked with NIGHTWISH and HYPOCRISY, among others.

"I thirst to go further as a human being and the music on this album represents a part of the ongoing spiritual journey — that's what I tend to I call it — which is my road onward," says BATTLE BEAST guitarist and vocalist Anton Kabanen. "Music-wise, the songs have been expanded to a wider area as an effort to call out emotions close to those I myself had during the times of birth of these songs."

He adds: "Like always, I wrote songs about the series 'Berserk', as well, and the reason behind writing songs about that particular series is that I can strongly relate to that, especially to certain characters and to their way of thinking and feeling."

Regarding the song "Touch In The Night", for which a lyric video can be seen below, BATTLE BEAST bassist Eero Sipilä said: "'Touch In The Night' is probably the farthest away from typical BATTLE BEAST sound we've ever went. It really sums it up, that in the pre-production phrase went under the nickname 'Alphaville.' If JUDAS PRIEST covered 'Big In Japan', I believe this is where they would end up."

He added: "True metal fans hold on to your hats — there'll be more blast beats for you later!"

BATTLE BEAST will embark on a European tour with Swedish metallers SABATON in January.

BATTLE BEAST's self-titled sophomore album entered the official chart in the band's home country of Finland at position No. 5.