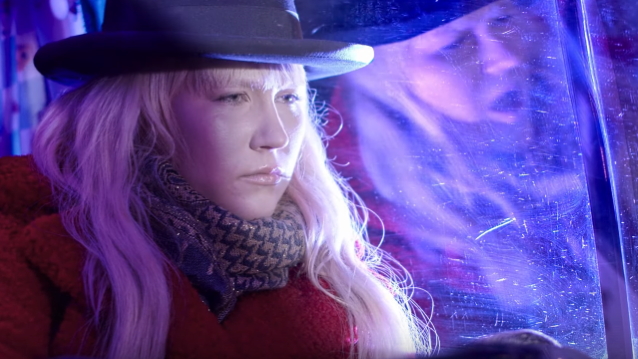 "Eternal Wheel Of Time And Space" was produced by Samuli Erkkilä, who also plays guitar in NOORA LOUHIMO EXPERIENCE. Some of the songwriting sessions for the album took place at JaBa Recording Studios in Hankasalmi, Finland.

Louhimo previously described the musical direction of her solo material to Kaaos TV as "soulful blues rock with country influences." She went on to say that it's important for her to pursue a different musical direction with her solo LP compared to that of BATTLE BEAST. "I really feel like, because I have different sides as a musician, and my roots, as a musician, is in blues music and in soul music, so I really want to show that side also to the audience — that I'm not just about heavy metal, but I want to show the people where I come from," she said. "And also I really don't want to compete with my own band [laughs], because I think it's really good that people can see different sides of me as a musician and as a person. And in the album, all the lyrics will be about my personal life, so I'm gonna show people myself in a whole new level."

The "Eternal Wheel Of Time And Space" video arrives nine years after the release of Noora's first solo single, "Relax".

"That first single, it wasn't even written by me, but it was custom made for me," she told Reality Check TV in a 2019 interview. "It was a prize of this singing competition [laughs] that I was contributing."

In 2012, Louhimo joined BATTLE BEAST with no previous experience as a metal vocalist but quickly acclimated herself as the replacement for Nitte Valo.

Four years ago, Noora told CrypticRock.com about her early musical influences: "Actually, I started listening to heavy metal and rock since I was a little girl. My father used to play LED ZEPPELIN, AC/DC and all the best. When I was around 15 or 16 years old, I started listening to DIO and such. That was the first time I heard IRON MAIDEN, which is my favorite to this day. Actually, I didn't think when I was 15 or 16 that I would ever be a heavy metal singer."

She continued: "Even though I was singing back then, I already knew at four years old I wanted to be some sort of performer. When I was a teenager, I was a more pop and bluesy kind of singer. The blues and rock came in my life when I was around 19 years old. I began studying more pop jazz music and I found my first band, which was called ADMIRAL OCTOPUS. We were playing Janis Joplin, Eric Clapton, and that kind of '60s-'70s kind of hippie rock. I fell in love with blues back then and started to find my raspy sound through Janis's music.

"After that band broke up, I started pushing myself forward as a solo artist. I was chumming around in different places and, in 2012, BATTLE BEAST found me through YouTube. They found a clip of me singing Janis Joplin — surprise, surprise — and because of that clip, I am now in the band. I think Janis Joplin might be some sort of guardian angel for me."