A seven-minute video "teaser" for the fifth album from the Finnish "dark metal" band BEFORE THE DAWN, entitled "Soundscape of Silence", can be viewed below. Due in Scandinavia on October 29 via Stay Heavy Records (two days later in the rest of Europe), the CD features the following track listing:

The cover artwork can be viewed below.

BEFORE THE DAWN's most recent album, "Deadlight", was released in April 2007.

BEFORE THE DAWN's "Faithless" single, which climbed to position No. 2 on the Finnish single chart in July 2007, featured the title cut along with a cover of PANTERA's "Mouth of War" (including a guest appearance by Jone Nikula) and a live version of the song "The Black".

BEFORE THE DAWN's current lineup: 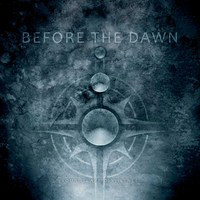