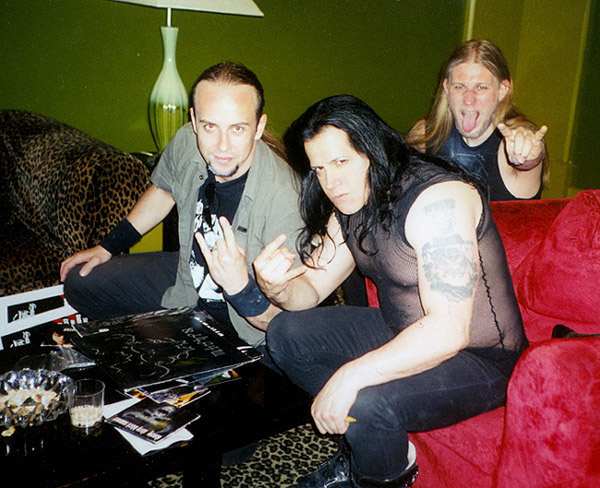 Check out this picture of Glenn Danzig with BEHEMOTH guitarist/vocalist Nergal and drummer Inferno backstage at the Universal Amphitheater "Blackest of The Black" show in early May.

Commenting on the recent shows, Nergal said in an online posting, "Blackest Of The Black was a great experience and we will never forget it. Playing the biggest venues in U.S., with BEST bands ever was totally awesome...! There is no secret that DANZIG and NILE belong to my fave bands, so all I have to say is: I'm happy. We've struggled for years to play shows like that...and we gave our fuckin best to show the REAL potential of the band. Needless to say, the idea behind Blackest Of The Black was simply ingenious! Gratitude should be sent to Mr. Glenn Danzig and his manager for putting up together such a splendid bill! Hopefully we will be back soon...maybe this fall. There is still lots of places we have to go and hearts to be conquered. I'd like to thank to all the people involved in these shows in anyway, and especially fans who came down to the shows early enough to see us and support the band! YOU ARE THE ONES!!!"