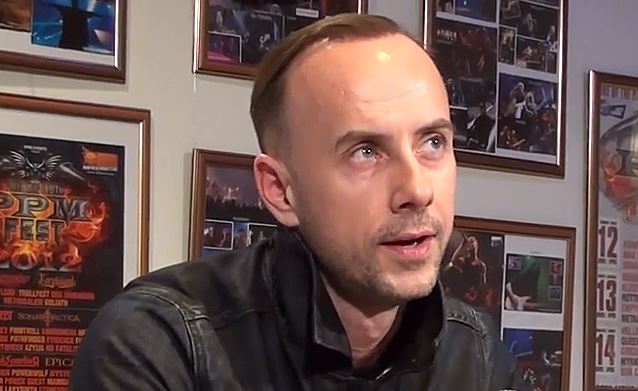 BEHEMOTH: 'The Satanist' Cover Painting To Include NERGAL's Blood

Tennille Secomb of Australia's Heavy magazine recently conducted an interview with guitarist/vocalist Adam "Nergal" Darski of Polish extreme metallers BEHEMOTH. A couple of excerpts from the chat follow below.

On the artwork for BEHEMOTH's new album, "The Satanist", which will contain Nergal's own blood blended into a painting by Russian symbolist painter Denis Forkas to give it "a more organic feel":

Nergal: "I wanted to incorporate some of my DNA into the art. This album seems to be so defining of who we are now as people and as individuals, and considering all the instances in recent years, [we wanted] to make it more 'ours' than it is usually.

"[The cover is] very arty; it's very artistic and it really has no heavy metal clichés in it. Expect something very special and spectacular, and deeper than all of the other products that are in the market."

Nergal: "We just couldn't agree [with Colin] on certain concepts and visions of what the record should sound like. [Colin] did a great job actually — but Matt was always supposed to be the main mixing guy for the record. Within a week or two weeks with Matt, I had the whole record mixed and believe me, it's the best-sounding BEHEMOTH record for sure. It's very organic, it's very different — I love it."

On being diagnosed with and overcoming leukaemia in 2010:

Nergal: "I have always been ahead of others, so to speak. I'm very much into hard work and being motivated, and I'm more than ever like that. It's the conscience that life is just a temporary thing — it has taught me to appreciate life more than anything else, you know. I am a fucking life-worshipping motherfucker.

"All of the so-called negatives that have happened in my life recently — I turn them into positives and advantages. This album pretty much just wrote itself [because] we just went with what naturally came out from our systems — we clean out all the filth and dirt, and it just materializes in song structures. Usually we try to force ourselves to cross certain boundaries and certain limitations. But unlike all the other albums, with 'The Satanist', we stopped doing that."

On "The Satanist" album title:

Nergal: "One of the reasons I thought it was the perfect title for a BEHEMOTH record is because I am tired of talking. It's more than enough what you see and what you hear, really. Let people contemplate and come up with their own interpretations. Fuck your brain a bit and stimulate it."