Polish extreme metallers BEHEMOTH have slammed a university in their home country after their concert was canceled for what the band claims were political reasons.

The group was originally set to perform on October 2 at Poznan's Eskulap venue, which also serves as a student dormitory at Poznan University Of Medical Sciences, described as "a leading Polish medical centre with over 80 years of academic experience." The concert was eventually moved to October 6 after the university authorities decided that the the original date coincided with the start of the academic year.

On Friday, BEHEMOTH's promoter received a letter from Jacek Wysocki, president of Poznan University Of Medical Sciences, stating the event would not go ahead due to "a concern for the safety of students and campus workers."

BEHEMOTH responded in a statement: "We have no doubt it is a political decision. It's not the first clampdown on national artists. Poznan, instead of being a free culture centre, begins to resemble Russia."

The band went on to cite Article 73 of the Constitution of the Republic of Poland which guarantees freedom of artistic creation and scientific research, as well as free access to cultural goods. In addition, the group explained it was forced to give up alternative arrangements, saying: "After a closer inspection, we decided the quality of our concert would suffer too much. We can't afford that at this stage of our career. We sincerely hope our fans will understand."

In 2011, BEHEMOTH frontman Adam "Nergal" Darski was acquitted in Poland on charges he insulted religious sentiment when he called the Catholic Church "the most murderous cult on the planet" during the band's September 2007 performance in Gdynia and tore up a copy of the Bible, calling it "a book of lies."

More recently, BEHEMOTH was ordered to leave Russia in May of this year after being detained in Yekaterinburg for violating the country's visa regulations.

BEHEMOTH's concerts in Khabarovsk, Tomsk, Novosibirsk and Krasnodar were canceled following a string of protests by Christian activists. According to The Moscow Times, unidentified thugs prevented the musicians from taking the stage in Novosibirsk and beat up concertgoers, local media reported. 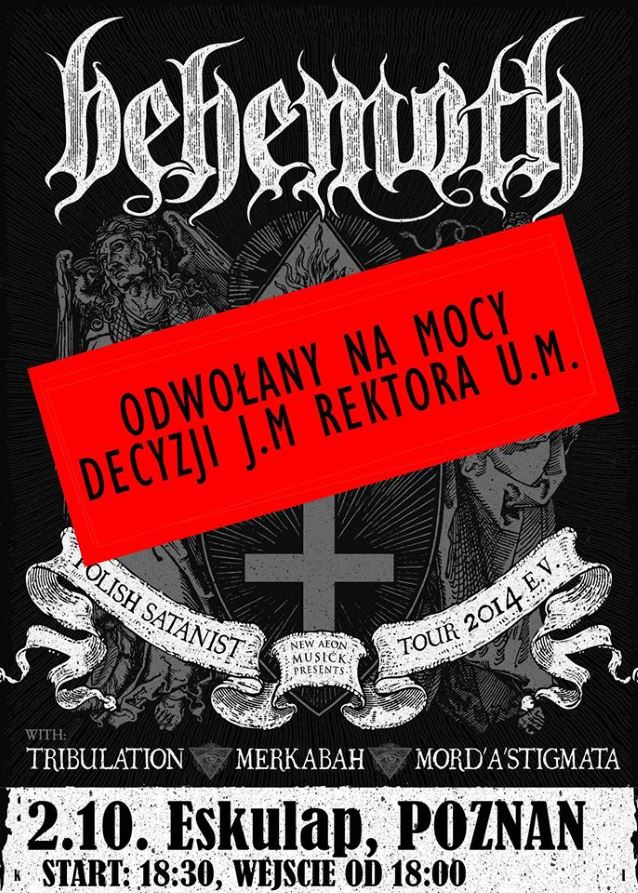