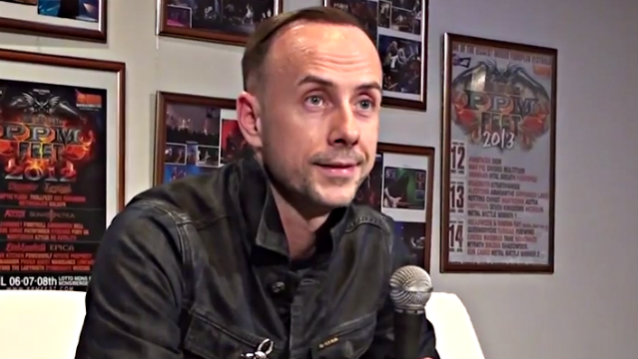 Niclas Müller-Hansen of Sweden's Metalshrine recently conducted an interview with guitarist/vocalist Adam "Nergal" Darski of Polish extreme metallers BEHEMOTH. A couple of excerpts from the chat follow below.

Metalshrine: With the new album, "The Satanist", you entered the Billboard chart at No 34.

Nergal: Yeah, and the previous highest position was 56 or something, I believe, so we got higher up this time around. I actually did some research and I think it's unheard of. I think the title can actually shut some doors for us, because it's so radical and it's really a "fuck off" title. It's like, "Fuck it! This is it!" For me, there are so many layers of it. I guess that when common people hear it for the first time, the first thing they feel is fear. But the western media also somehow feel very attracted to it, which is weird.

Metalshrine: It's also weird climbing the charts in a country like the U.S., which is a very religious country.

Nergal: They are as fanatical as they are liberal. Europe is way more conservative. The U.S. is extreme in many ways.

Metalshrine: You recently said that U.S. death metal bands are boring and generic?

Nergal: It's not just the U.S. I really hope my friends in NILE don't think that, because it's not what I meant. The majority of death metal bands are boring to me. It's how it is. This endless strive for perfection and processed recordings. They're so perfect and professional to the point of throwing up. I'm not buying it. I'd rather go for something that is very organic and more human oriented and that has the human factor in it.

Metalshrine: What bands do you find exciting then?

Nergal: The funny thing is that hardly any of the bands in the darkest niche of the genre offer the most sincere or genuine or best music. I would rather listen to SVARTIDAUDI, KRIEGSMACHINE or ORANSSI PAZUZU than listening to the new MORBID ANGEL or DEICIDE. Their music doesn't do it for me at all, and that's music I grew up with.

Metalshrine: Could there ever be a Nergal solo album?

Nergal: Yeah, I'm thinking about it. I've been thinking about it for years now. What I need now is to balance myself with something that's gonna be exactly on the opposite side of BEHEMOTH. You would never ever see me doing a black metal, death metal or metal project. I put all my energy into BEHEMOTH, so to balance my life I'd really need to do a really stripped down and primal sound. What I'm thinking about is probably just one or two male vocals, some acoustic guitars and maybe a bass drum only.

Metalshrine: Do you already have music like that lying around?

Nergal: Yeah, I've been fucking around with stuff. I've done some demos, which I hardly ever play for anybody. It's gonna be dark and sinister, but a bit different. Like 16 HORSEPOWER and WOVENHAND and that kinda stuff.