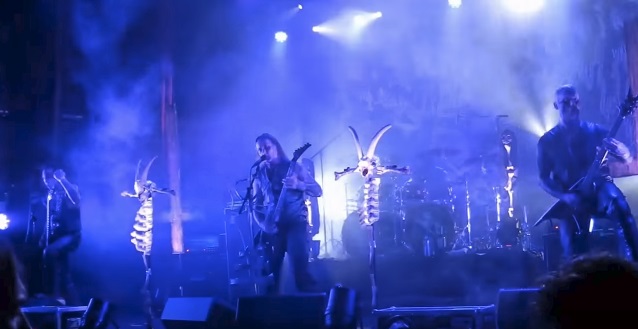 European diabolical death/black metal kings BELPHEGOR have released a performance video for the song "Baphomet". The clip was shot last December at the Saving Christmass festival in Nörrköping, Sweden by the band's friend and Norwegian shaman Espen Dyngen.

"Baphomet" is taken from BELPHEGOR's latest album, "Totenritual", which was released last September via Nuclear Blast. The disc was recorded at Stage One Studios in Germany and Studio Mischmaschine in Austria and was mixed by Jason Suecof and mastered by Mark Lewis at Audiohammer Studios in Florida. The artwork was once again created by Greek artist Seth Siro Anton, who also painted the cover artwork for 2006's "Pestokalypse VI" and 2014's "Conjuring The Dead".

BELPHEGOR singer, guitarist and founder Helmuth Lehner stated about "Totenritual": "It is the most brutally heavy offering we have consecrated thus far. The drums are precise and very technical with loads of breaks, fills and tempo changes. The bass is like a panzer tank. Also, the rhythm guitars are utterly aggressive and obscure. You don't hear guitars like that anywhere with such a massively low tuning."