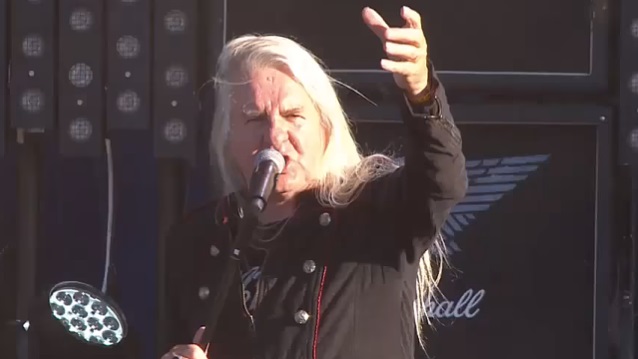 SAXON vocalist Biff Byford was recently interviewed by Diane Webb of Yesterdaze News. The full conversation can be streamed below. A few excerpts follow (as transcribed by BLABBERMOUTH.NET):

On the group's new album, "Thunderbolt":

Biff: "We try to keep the same sort of guitar sound, which are very sort of vintage. Then we mix it together with fairly modern stuff. Andy Sneap produced the album, and he has a great way of keeping the sort of retro guitar sounds but adding something a little bit modern to it, so it sounds pretty cool to the modern ear."

On the group's upcoming North American tour with JUDAS PRIEST:

Biff: "We haven't done a long tour like this in America for quite some time. We did a few shows with JUDAS PRIEST a couple of years ago, but to be invited on a full tour is really, really special. It's really great. It's been a while since we were on the big stages in America, so we're looking forward to it. We play pretty big stages in Europe, so we're ready for it. We're trying to do as good of a production as possible. Obviously, it's a JUDAS PRIEST tour, not a SAXON tour, so we have to be a little bit aware that we can't bring everything, but we're going to try to make the show as great as possible, and do a few new songs and some of the big hits from the '80s. It should be cool."

On whether, after 22 albums, the band ever gets "tired" of performing anything live:

Biff: "No, we never get tired. The thing is, the songs belong to the audience, really. In the '80s, those songs were so big — 'Denim And Leather' and 'Power And The Glory' and 'Princess Of The Night', 'Wheels Of Steel' — they're such big songs with people that we never get tired of playing them. Each time we play to a different audience, so it's a different version, really."

On the new song "Predator", which features guest vocals by Johan Hegg of AMON AMARTH:

Biff: "They're good friends of ours. We like the band. We met them when they first started touring way back, several years ago. We like the viking rock. We feel like we're brothers-in-arms there. They're obviously a younger band than we are, but they grew up with SAXON in Sweden in the '80s, so they're big fans of SAXON, and we're big fans of theirs. When I wanted to do a lower voice on that song, I thought of Johan straight away. He was my first choice, and he did such a fantastic job. It sounds great. It's a little bit radical for us, but I don't like being predictable. I like taking a few chances with things like that, see if the fans like it."

On his thoughts on the state of heavy metal in 2018:

Biff: "I think where we come from — MOTÖRHEAD, JUDAS PRIEST and all those British bands, even the bands from the '70s like [BLACK] SABBATH — they all come from a very, very industrial, working-class background. That sort of background's not really there anymore in the U.K., and I know it's not there anymore in America, like Detroit and some of the big industrial towns. It's difficult these days, because a lot of bands have got recording equipment; they can mix; they can make records; they can write and record records in their garage and their bedrooms. It's a little bit changed. I find that a lot of new bands aren't quite so desperate. When we started, it was just cassettes and vinyl. I think that sort of attitude is gone now. I think it's a new attitude that young bands are writing stuff, because they're able to do that. They don't need a big studio. In some respects, I think it's better, but in other respects, it's not as good."

Biff: "Apart from a platinum album in America... We'd like to go to China. We've done a lot of stuff, you know. But we still like touring and meeting our fans, and making new fans, especially in America. There's a lot of people in America who have sort of heard of 'Denim And Leather' but don't know who played the song, so I think we still have a lot of fans in America who we need to play to, who we haven't played to for years."

The official video for the "Thunderbolt" title track, featuring footage from SAXON's pyro-filled performance at Wacken Open Air and a host of other live gigs, can be seen below.

SAXON will join JUDAS PRIEST on a North American tour that kicks off March 13 in in Wilkes Barre, Pennsylvania and wraps on May 1 in San Antonio, Texas. Additional support on the trek will come from BLACK STAR RIDERS. 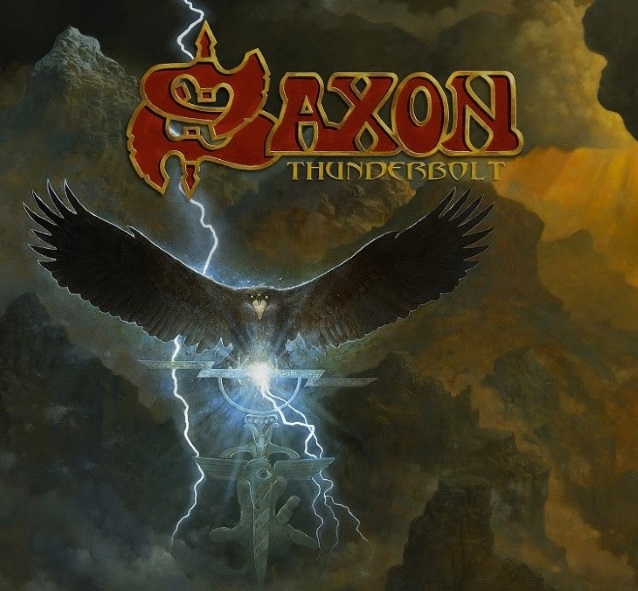