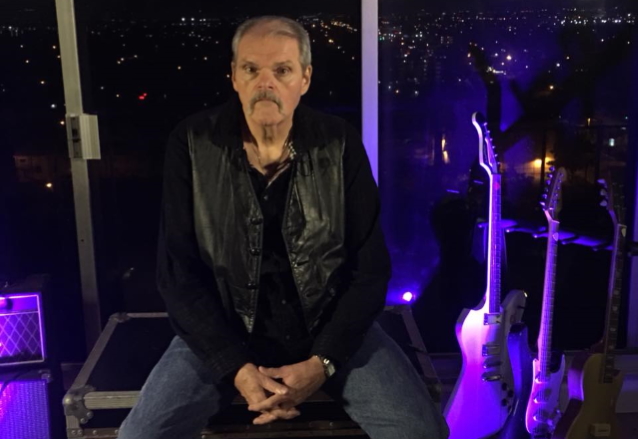 Born John Joseph Harte III in Newark, New Jersey on November 15, 1951, he was the older of two boys raised in a traditional Irish-Catholic family in nearby Passaic. When Harte's mother unexpectedly passed away, he helped support his family while dreaming of becoming a famous musician. The rock and roll band that Harte played drums and percussion for did not last long, but a chance experience keeping people at bay outside a GRATEFUL DEAD concert would change the trajectory of his life.

"I was noticed at that show because I was big, dressed in denim and black, looked tough with my biker's mustache and could handle a rowdy crowd," Harte recalled while working on his memoir in 2021. "I soon found myself handling security at Passaic's Capitol Theater, Jersey City's Roosevelt Stadium and New York's Fillmore East for musicians ranging from Gregg Allman to Lou Reed to the NEW YORK DOLLS. I learned all aspects of the music business 'ground up' by ushering guests, tuning instruments for performers and doing whatever was needed to ensure a concert ran smoothly."

John's efforts paid off: In late 1975, he was offered the job of a lifetime — traveling on tour with KISS.

"A fella named Rick Stuart, who was already working security with the group, knew I wanted to get on the road as the next step in my career. After the band played the Capitol in October 1975, Rick took me to the hotel room where they were staying. I met tour manager JR Smalling, and was given — or subjected to [laughs] — an impromptu interview. A few days later, I was offered the job by manager Bill Aucoin, soon went on the group's first European tour and worked an average of six days per week for almost a decade. An experience of a lifetime."

"Guys like [John] are a rare breed," states KISS co-founder and frontman Paul Stanley from his foreword contributed to Harte's forthcoming book. "John was a formidable presence and was rough around the edges for sure, but that never overshadowed the dedication and conscience he would show while babysitting and coddling four spoiled and needy rock stars who were always vying for attention and affirmation that they were his favorite."

"Big John is a legend in the KISS world, nearly as big as the band itself," recalls Michael Brandvold, co-founder of KISS fan podcast "Three Sides Of The Coin". "Growing up I saw him as this larger than life, imposing figure who was tasked with protecting the identities of the KISS members. But, when I first met him in 2018, I quickly saw John for who he really was… a quiet, gentle giant with a big heart."

After an exclusive eight-year stint with KISS, Harte spent much of the 1980s touring with British heavy metal band IRON MAIDEN, enjoying more than his share of all perks the music business had to offer — the rock star lifestyle that millions have fantasized about.

"John had worked with us for several years and I recently had a great visit with him laughing and sharing stories together," recalls longtime MAIDEN drummer Nicko McBrain. "A great guy and valued member of the family who will be sadly missed."

Harte's days with MAIDEN would lead to a four-decade friendship with Steve Altman, who signed on as bassist Steve Harris's personal assistant and later encouraged Harte to chronicle his rock and roll adventures.

"I was young and John took me under his wing, even as we both moved on to other music industry opportunities," says Altman. "He was a constant 'go-to' in my life and was always there for me."

Harte would eventually settle down and marry the love of his life, MaryAnn, and have their son Brian. Although he would give up the day-to-day, grueling schedule required of world touring, Harte would continue working as late as the 2003 KISS/AEROSMITH tour. It was then Harte realized that he had his own following of supporters, and would travel to various conventions and an official Kiss Kruise in 2017 to meet them.

"John was loved by so many fans of the bands he had worked for," said his wife. "The admiration that was always shown to him by those whom he met always blew him away. He treasured those moments."

Harte's book will be completed and published posthumously in 2023.

"John was not only a part of KISStory but, in a sense, also a rock star in his own right," says Harte's co-author Robert V. Conte. "He witnessed first-hand how the concert scene evolved from the days of the most basic, often error-ridden performances to the visual and audio spectacles most concerts offer today. John and I spoke often over the past few years developing his book and I promised his memoir would be published no matter what. Despite his terrible loss, I will keep that promise."

Those wishing to leave their remembrances with "Big" John Harte may do so on his social media page.

A GoFundMe page has been established for those interested in contributing to John's final expenses. Details to follow.

How very sad. “Big John” Harte was with us from the beginning and has ALWAYS been family. He fought valiantly and relentlessly against cancer and I was thankful to be able to cheer him on. He remains a legend in KISSWORLD. My condolences to MaryAnne and Brian. https://t.co/AAXm0OT5by

Rest In Peace, John Harte. A wonderful man. He was our security guy in the 70’s. Our prayers and condolences to his family. https://t.co/4XtElbigTN

Me and my bodyguard John Harte…He was my bodyguard and very good friend ! He saved my life more than once! Wish I could...