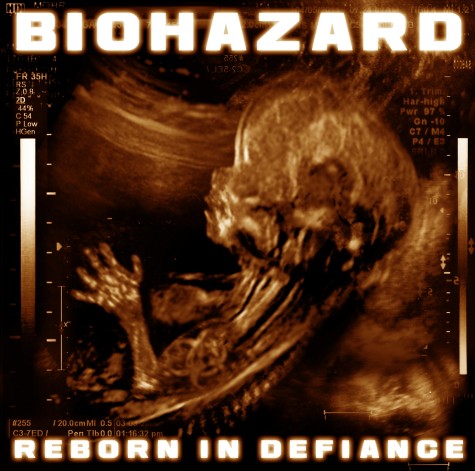 "Reborn In Defiance", the new album from New York hardcore/metal veterans BIOHAZARD, has entered the German Media Control chart at position No. 80.

Commented guitarist/vocalist Billy Graziadei: "Even when the odds are against us and we are starring into the face of adversity, we still come out alive. We do this for the love of it and with our loyal fans behind us, we're not stopping, we're STOMPING! See you on tour!"

"Reborn In Defiance" was released in Europe on January 20 via Nuclear Blast Records. A U.S. release date has not yet been announced.

Having last recorded and toured as the fundamental lineup with the release of "State Of The World Address" back in 1994, BIOHAZARD reformed with all four original members back in 2008 to commemorate the band's 20th anniversary. They went back out on the road together over the next two years, during which time inspiration struck.

The legendary Toby Wright (ALICE IN CHAINS, METALLICA, SEVENDUST, KORN) was brought in to produce the 13-track "Reborn In Defiance", which was recorded in Los Angeles.

BIOHAZARD bassist/vocalist Evan Seinfeld left the band in June 2011 after the band's new CD was completed and was replaced by Scott Roberts, who played on the band's 2005 "Means To An End" album and has been part of the BIOHAZARD extended family since.

BIOHAZARD is currently taking part in the "Persistence Tour 2012" with SUICIDAL TENDENCIES, TERROR, WALLS OF JERICHO, LIONHEART and CRUSHING CASPARS.