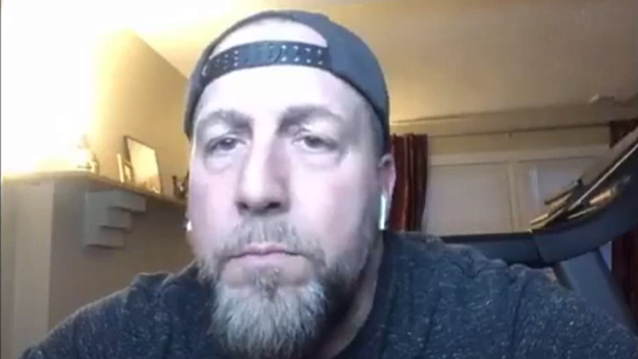 The first wave of confirmed dates for the seminal outfit includes multiple international festivals in the summer of 2023, as well as select appearances in America.

In a new interview with Dan Shinder of Drum Talk TV, Schuler stated about how BIOHAZARD came back together (as transcribed by BLABBERMOUTH.NET): "We haven't toured in about seven years, almost eight years. In about 2015, [that] was the last year of touring. We wrapped it up after that. We went in the studio to go do a record and things just kind of imploded; everybody's a bunch of crazy personalities. In the ensuing years, we didn't do anything as BIOHAZARD. And then about a year and a half ago, my brother, who lives in Torrance, California, was flying back home to New York to come see everybody. And he gets to the airport here, and he says to me, 'You won't believe who I saw at the airport.' And I said, 'Who was that?' And he goes, 'I saw Evan,' the bass player from BIOHAZARD, Evan Seinfeld, who I hadn't spoken to in 10 years. And they had a good conversation, and it was cordial. And he basically sent a message through my brother, 'Tell Danny I said hi.' So a week later, I'm going on vacation. I'm feeling good. I'm going down to the beach house here in [New] Jersey with my wife and my kids, and I said to my wife, 'Maybe I should call him' — you know, just bury the hatchet. Who cares anymore? Like everybody, COVID and all these people dying and all this stuff, it's, like, who the hell cares about all that old stuff that made you mad. So my wife was, like, 'Yeah, why don't you give him a call? Don't be an asshole. Call him.'

"Anyway, long story short, I did call him and we spoke," he continued. "And we just kind of buried the hatchet. And the other guys in the band, Bobby and Billy, had been speaking, and we've been speaking, and everybody just kind of started talking a little bit. And unfortunately, our former manager, Scott Koenig, who was out in Los Angeles, he passed away. And that was a real moment where it was, like, 'Wow.' Scott was with us from the beginning, and he was like a fifth member of the band. … That was in October of '21. … I got that call. And the same week, another friend of ours from a band called DOG EAT DOG, our friend Sean Kilkenny passed away the same day as Scott. So it was two phone calls, two brothers, two great, close friends, like family, both passed at the same time. And for me, that was kind of one of those things where it's just, like, who cares about all the negative bullshit in the past? Who cares? We're still here. We did great stuff together. We created something cool. We should all be friends. And that was my thinking. And everyone kind of felt the same way. And that kind of was the beginning of how it started, getting the band together."

Asked what it has been like rehearsing for the first time in many years with his BIOHAZARD bandmates, Danny said: "That hasn't happened yet. All four of us still haven't been in a room yet, so I don't know what's gonna happen. Everybody lives in different parts of the world, so it's not easy to get together. But we're starting rehearsals in a couple of weeks out in Los Angeles, so we'll be seeing each other. But I think it'll be fine, man.

Regarding BIOHAZARD's touring plans, Danny said: "Dates are coming. We've got a bunch of dates already, and more are coming every week. So, yeah, a tour is happening later in the year. I'm not exactly sure when the first date is gonna be yet, but I know we've got a bunch in August, festival stuff in Europe, and maybe some local stuff in the United States right before that. And then we're doing some festivals in the U.S. in September [and] October also. So, yeah, we're gonna be working a lot."

As for the possibility of a new BIOHAZARD album, Schuler said: "Making new music wasn't really something I was really thinking about too much, but it's come up so much in the last few months since we've been talking about all this stuff. So we'll see how it goes. There's definitely interest there for us to do it. I just hope we can do it. I wanna be able to do it at the level we always did it at.

"I write a lot of music on my own, of course, but I'm very much into collaboration," he explained. "I've always needed a partner, or partners, to really bring the best out of me, to challenge myself. And I always loved getting in a room with these guys. We've always come up with great stuff when we're in the right mindset to do it. So I'm excited to get in a room with them and just let shit fly. I have the energy for it, I'm ready and I'm excited to do it, and I think they are too. So I'm hopeful that we're gonna make something really cool and different and innovative."

In addition to touring, BIOHAZARD has a 35th-anniversary documentary in the works containing previously unreleased footage spanning four decades.

"BIOHAZARD is an iconic band that ripped it up on the streets of New York when I lived there in the late '80s and early '90s, so I'm excited to be working with them to bring their pioneering hardcore sound to a new generation," said Andy Gould (ROB ZOMBIE, PANTERA, TYPE O NEGATIVE). The band is managed by Gould and Paul Gargano and booked by Jim Morewood at the K2 Agency internationally, and Steve Sokol at Pinnacle in North America.

Stated Graziadei: "Over the years, we made some great music together and had so many incredible shows on some pretty amazing tours. After spending so much time and focus on POWERFLO and my solo project BILLYBIO, things just fell in place at the right time and I decided it was the time to recapture that energy and go kick ass again with the original lineup of BIOHAZARD with DannyBobby, and Evan!"

Added Hambel: "I'm honored to perform with the band again. I can't wait to get onstage with the guys and do what we do! I'm looking forward to traveling and playing live. See you out there!"

Stated Seinfeld: "It's been ten years since we all played together, and I'm in a huge place of gratitude for the opportunity to get back to the roots of BIOHAZARD and not only reconnect with the other guys, but also the fans. We've been through decades of madness, and it feels like the fantastic four are back together."

Last year, Graziadei said in an interview that there had been "talk" about putting BIOHAZARD back together.

The group, which is acknowledged as one of the earliest outfits to fuse hardcore punk and heavy metal with elements of hip-hop, had been out of the public eye since Scott Roberts left the band seven years ago.

Seinfeld made his last recorded appearance with BIOHAZARD on 2012's "Reborn In Defiance" album, which marked the first LP featuring the band's original lineup in 18 years.